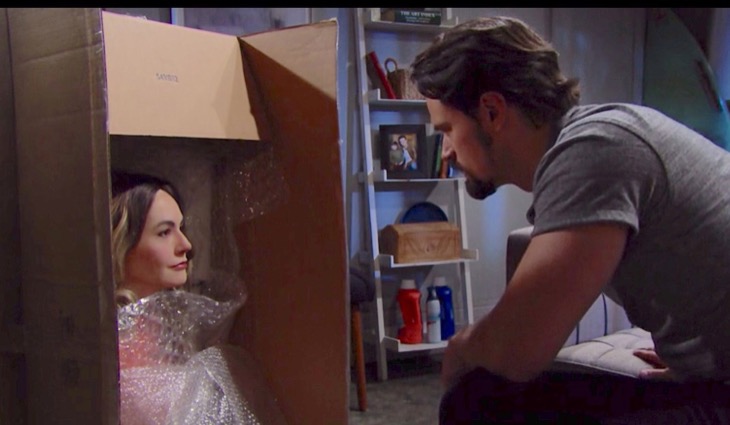 The Bold and the Beautiful star Matthew Atkinson’s character, Thomas Forrester, might be in a relationship with a demonic mannequin. However, in Los Angeles, the actor has his own scary story to tell. It was the same Hope Logan (Annika Noelle) mannequin that he shares scenes with. He admits that he “literally got scared” after a creepy encounter with the life-sized doll.

The Bold and The Beautiful Spoilers – Thomas Forrester’s Doll Story

B&B fans are currently seeing Thomas have a bizarre storyline with a mannequin that looks exactly like Hope. He is hallucinating and hearing the doll profess her undying love and giving orders to kill Liam Spencer (Scott Clifton). However, it seems that fans (and Thomas) are not the only ones creeped out. The mannequin has been working off-camera to scare the actor, too!

Fans are divided on the mannequin having its own story, but we were warned about this. Of course, when executive producer and head writer Bradley Bell said the mannequins would have their own story, we thought he was joking.

The Bold And The Beautiful Spoilers – Matthew Atkinson’s Creepy Encounter

The Bold and the Beautiful actor told Soap Opera Digest about a creepy encounter he had with the Hope mannequin. It happened one night after the cameras stopped rolling and the set was completely dark.

“When we’re not shooting, they keep the lights off, and this one time, I was walking across the stages on my way to shoot a scene and I passed by Thomas’ apartment set and they had the Hope mannequin sitting there on the sofa. I didn’t know it was the mannequin and I literally got scared because at first, I thought Annika was sitting there by herself in the dark… I looked closer and was like, ‘It’s the freaking mannequin!’”

Even Atkinson admits that the Hope mannequin looks a little too much like actress Annika Noelle. However, he was quick to say that there is no comparison because his co-star is very beautiful, much more so than a mannequin. In any case, we love the story that Atkinson shared about his creepy real-life encounter with “Plastic Hope!”

Tell us what you think of the mannequin storyline? If you could make changes to the script right now, what would you do and why?

The Bold And The Beautiful (B&B) Spoilers: Zende And Zoe Busted, Ridge’s…