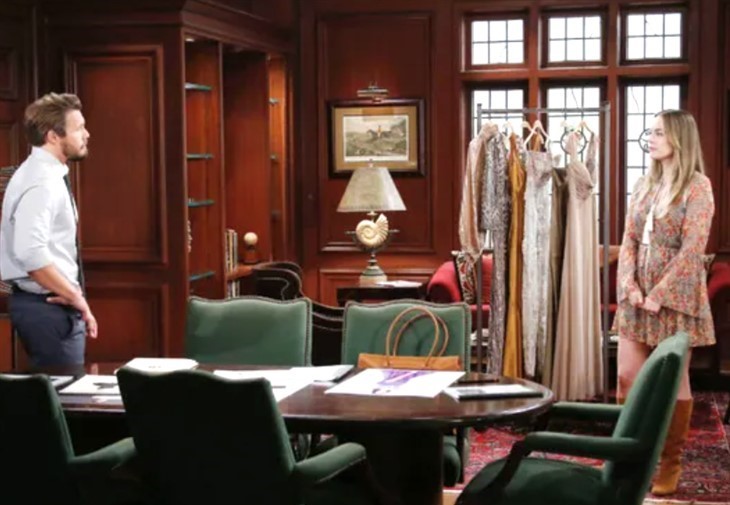 The Bold and the Beautiful spoilers tease that Liam Spencer (Scott Clifton) has talked himself into a corner. Now, rather than Thomas Forrester (Matthew Atkinson) being revealed for what Liam thought was another attempt to create a love connection with Hope Spencer (Annika Noelle), Clifton’s character has become the villain.

The free will choice Liam and Steffy Forrester (Jacqueline MacInnes Wood) made to romantically reconnect at the cliff house creates the possibility of a dramatic reset. Steam has a real chance of coming back, with Lope imploding and Sinn dissolving before John Finnegan (Tanner Novlan) even had a chance to secure a relationship with Steffy.

The Bold And The Beautiful Spoilers – Squeezing Old Grudges Too Hard

Liam just couldn’t let it go. No matter what Hope and Steffy were telling him, Liam refused to believe that Thomas had changed.

Not only was Thomas changing, in trying to be a better father and person, he recently hit his head at Forrester Creations. That incident appears directly connected to some internal brain related issue, which has caused him to experience increasingly aggressive hallucinations where a mannequin that resembles Hope comes alive and issues commands.

Liam was blind to even considering that Thomas had some type of physical issue, which was different than the mental health imbalances he’s battled. Liam’s decision to squeeze old grudges led to an unplanned night with Steffy that could have permanent consequences.

On one point, Liam hasn’t been wrong. He recently reassured Hope that he recognized her good nature.

Hope has been trying to see Thomas’ progress, which enabled her to approve of him rejoining the Hope For The Future design team. She also rationalized him having taken the Hope mannequin to his apartment and then withholding the fact that he did so as part of Thomas’ creative process.

The watershed moment that viewers saw play out in Thomas’ apartment was deeply emotional. Both people were very moved by the reveal of Thomas’ actual issue and Hope’s ability to talk him off the ledge. Then came his collapse and hospitalization.

The Bold And The Beautiful Spoilers – Steffy Forrester Is The Future?

B&B may have been head-faking the audience. Finn was introduced in the summer as Steffy’s doctor, who treated her following the motorcycle accident. But he quickly became a friend and then, significant other.

The Bold And The Beautiful Spoilers And Recap Friday, December 4: Liam Realizes He’s The Cheater, Not Hope – Thomas’ Diagnosishttps://t.co/dHJXqjtgAn

The freshness of seeing a secure Lope, Steffy moving on from Liam, and Thomas advancing toward normalcy now seems, in retrospect, to have been part of a storyline setup. Steam and Lope may be forever destined to mix and mingle, with the children tying Steffy and Liam to an even greater degree if she’ll be pregnant with his child.

Assuming Liam and not Finn as the father doesn’t necessarily mean that Hope would end Lope. But that outcome surely would push the story strongly in that direction.