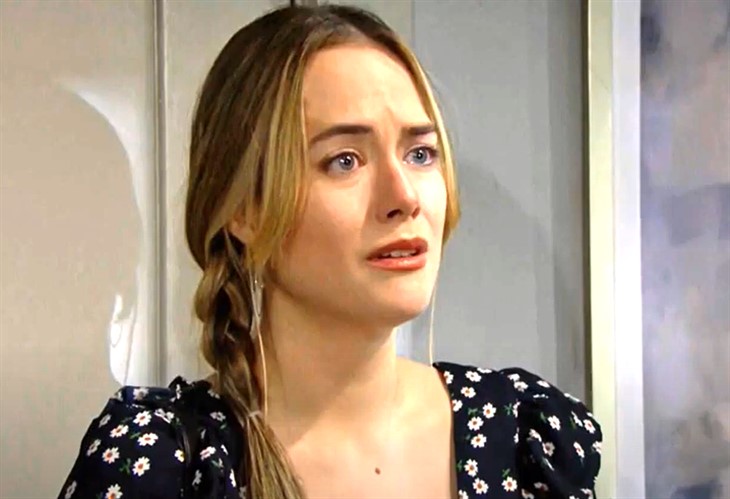 The Bold and the Beautiful spoilers tease that in Los Angeles Hope Spencer (Annika Noelle) will learn that Liam Spencer (Scott Clifton) reconnected with Steffy Forrester (Jacqueline MacInnes Wood) because this is daytime. But the question is, will she do so accidentally when Liam purges his ever conflicted soul?

The above scenario could unfold in many ways. An overheard conversation, like when Eric Forrester (John McCook) listened to Quinn Fuller Forrester’s (Rena Sofer) video chat with Shauna Fulton (Denise Richards), or a found piece of evidence are two plot techniques that could be used.

Of course, there is the baby issue to be considered as well. No, that reference isn’t to Beth Spencer (Madeline Valdez and River Davidson), or Kelly Spencer (Avalon and Colette Gray). Instead, it’s to the next child that Liam will have with Steffy.

The Bold And The Beautiful Spoilers – Steffy Forrester’s Pregnancy Storyline

B&B fans know that Wood is pregnant in real life with her second child. She and her husband are expecting in 2021.

Based on real life events, the writing staff could write Steffy’s character into pregnancy. That choice would seem to be necessary before Wood departs the cast on maternity leave, rather than after she returns.

Assuming that Steffy will become pregnant with Liam’s child, she would deliver by approximately the end of August, or the beginning of September. Estimating Wood’s maternity leave for sometime this summer, that timing could allow her character to deliver a baby before the fall.

John Finnegan (Tanner Novlan) is part of the storyline, of course. So if Steffy learns that she’s pregnant, then Finn would likely be part of the discussion as a father candidate.

Fans know that Sinn has grown close in recent weeks. The timing of that couple being involved in romance and Liam and Steffy being together at the cliff house has to be purposeful.

So, B&B could unveil more than one conflict storyline, with Finn and Liam both being father possibilities, while Hope is alienated from her husband.

The Bold And The Beautiful Spoilers – Liam Spencer Compartmentalizes

If Liam is the father and isn’t revealed as that accidentally, then he surely isn’t likely to remain silent about the baby he’s having with Steffy. Liam would not allow Finn to assume fatherhood status in order to keep Lope going, or to save that relationship.

So, if Steffy and Liam decide to remain silent, or can’t bring themselves to tell the truth, then the matter will be compartmentalized. Withholding information of that magnitude is also known as lying. And since this is B&B, another Steam verses Lope angle has been drawn.