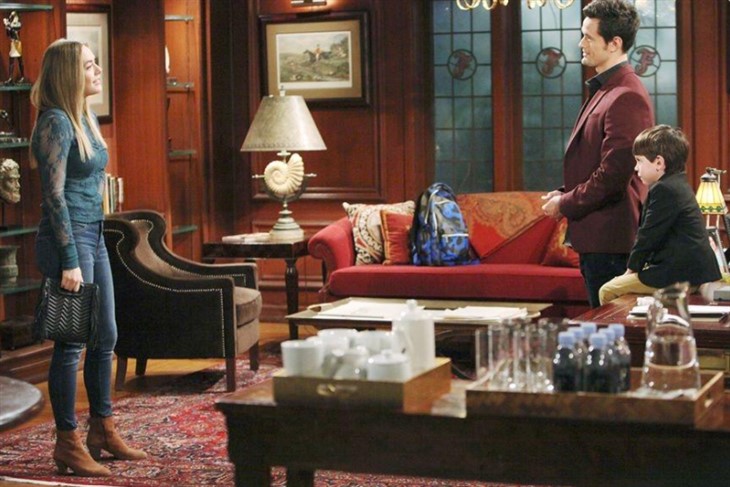 CBS The Bold and the Beautiful spoilers document that Hope Spencer’s (Annika Noelle) words and actions shouldn’t be misinterpreted. She hasn’t let her guard down where Thomas Forrester (Matthew Atkinson) is concerned. But his one-time obsession did openly acknowledge that he’s made solid progress in becoming a better father.

B&B also presented a pair of brief, but purposeful contrasting daydream scenes. In one Hope was reflecting on her latest love story with Liam Spencer (Scott Clifton). In the other, Thomas was recalling his interest in Hope. Of course, Hope’s reflection involves her husband and Thomas’ retrospective moment took him back to an unstable time in the recent past.

Liam told Steffy Forrester (Jacqueline MacInnes Wood) that he was leaving the cliff house, as she requested. But he was taking their daughter, Kelly Spencer (Avalon and Colette Gray), with him.

That choice will spark mega drama between Steffy, who feels abandoned, and Lope. But the strong response Liam and Hope will face won’t mean that they’re doing anything wrong.

Clifton’s character had to confront Steffy about what could be the beginning stages of major addiction. Wood’s character, acting erratically due to the rough nature of her recovery process, won’t accept Liam’s decision.

Hope and Steffy had actually been getting along rather well. There were even some playful exchanges when Hope encountered Dr. John Finnegan (Tanner Novlan) with Steffy at the cliff house on a recent occasion.

Like others, Hope believed that Steffy was getting back to her old self. But the prescription medication was actually masking ongoing physical and emotional pain.

Steffy’s lash-out at Lope, regarding Kelly’s best interests and absence from her care, will be fierce. Hope, who has been helpful and fully sensitive to Steffy’s situation, will be greatly disturbed by what unfolds.

The Bold And The Beautiful Spoilers – Liam Spencer’s Focus Shifts

Liam has been forced to focus on an issue that he never thought Steffy would face. His need to protect their daughter and to pressure Steffy to get help won’t be something that Thomas accepts.

The progress Hope was realizing with Steffy and Thomas will be jeopardized during this period. However, the tie Hope has to Thomas through Douglas Forrester (Henry Samiri) won’t be broken and might not even be damaged.

Thomas currently has no chance to become Hope’s love interest. But developing drama might allow Atkinson’s character to reestablish trust with Hope, which fans can find intriguing.

Eastenders Spoilers Next Week: Ian And Isaac Both Threatened, Phil Warned And Linda Gets Caught