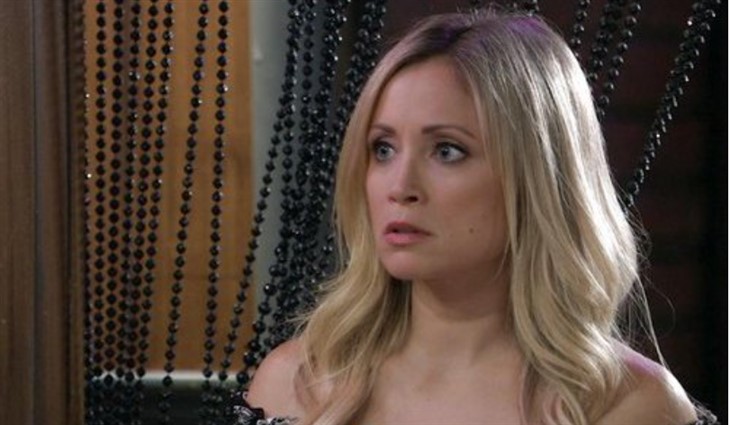 ABC General Hospital spoilers tease that Lulu Spencer (Emme Rylan) will team up with Jackie Templeton (Kim Delaney) in upcoming episodes. She will enlist the seasoned reporter in an effort to expose and take down Cyrus Renault (Jeff Kober)!

Longtime General Hospital viewers will remember Jackie Templeton, then played by Demi Moore. Back then, it was Lulu’s father, Luke Spencer (Anthony Geary) who teamed up with Jackie. Her sister, Laura Templeton (Janine Turner), a friend of Luke’s had disappeared. This was also during the time when Laura Collins (Genie Francis) disappeared. Another woman named Laura, also blonde, as both Laura Templeton and Laura Collins were, had also disappeared! At first, they must have thought there was a maniac loose with an obsession for blonde Lauras!

It was later revealed that Laura Templeton had been hypnotized by David Grey (Paul Rosselli) to steal merchandise for him. Luke and Jackie teamed up to take Grey down and rescue Laura Templeton, who had also been kidnapped by him. It was later revealed that Laura Collins was in Greece, kidnapped by the Cassadines. The disappearance of the third Laura was a coincidence. Later, Jackie proved to be a romantic complication. Sparks flew between Luke and Jackie, and also between Robert Scorpio (Tristan Rogers) and Jackie!

Viewers will remember a few weeks ago Lulu had asked Peter August (Wes Ramsey) about doing an investigation. She said she wanted to dig into the past of Cyrus Renault and expose him. Peter was hesitant-after all, the last time Lulu did an investigative crime series her digging dug up a not so dead Ryan Chamberlain (Jon Lindstrom)! He nearly killed Lulu!

She persisted, telling him she had been in communication with a big name reporter out west. Lulu said the other crime reporter was willing to work with her. She continued, and finally convinced Peter to let her do it after telling him this reporter’s by-line in “The Invader” would bring in a lot of new readers! Jackie worked with Luke years before either Lulu or her brother Lucky Spencer (Jonathan Jackson) were born.

Whether Lulu had heard stories about Jackie as a child or contacted her as a coincidence remains to be seen. Jackie may have consented to work with her upon finding out she was Luke’s daughter, however. She would have almost had to have wondered if a Lulu Spencer from Port Charles was related to Luke, and may have asked her! Either way, Jackie will soon be making her way to Port Charles and she and Lulu will start their own adventure!