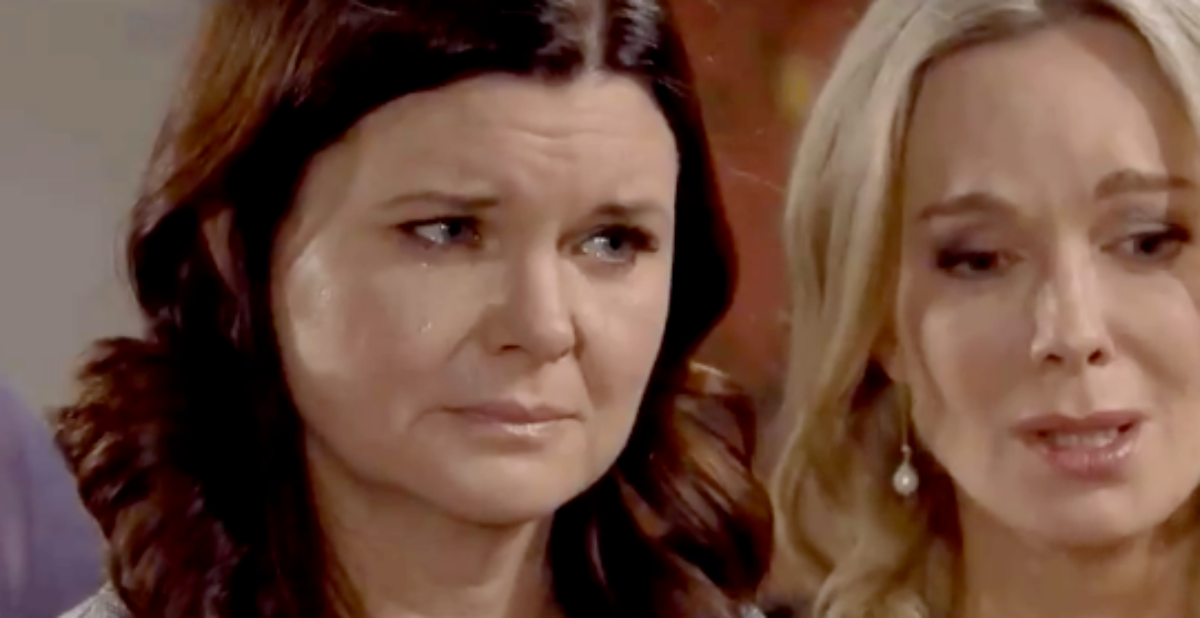 The Bold and The Beautiful spoilers tease that Katie Logan Spencer (Heather Tom) will shut Donna Logan (Jennifer Gareis) down when she tries to talk her into forgiving their sister Brooke Logan Forrester (Katherine Kelly Lang)!

B&B Spoilers: Brooke Logan Forrester Has Fooled Around With Bill Spencer Before

This is not the first time that Brooke has fooled around with Bill Spencer (Don Diamont) before, while he was either married to or involved with Katie. Bill has been known to fool around with other women as well, and that is exactly why this time Katie has not formally remarried him yet but is just living together.

Some of the times that he strayed were times when her life was in danger, having needed both a heart transplant and a kidney transplant. But Brooke has no excuse either – she could have slapped in the face instead of just giving into her lust and making out with Bill in Hope Logan’s (Annika Noelle) cabin! Katie tells Donna that there is no way she is going to forgive Brooke again for making out with Bill, sister or no sister! This is just too much, and a double betrayal – Katie has to protect herself emotionally!

Katie tells Donna if she forgives Brooke, it will make her feel too vulnerable to her and she cannot stand any more pain now. She has put herself out and gotten attached to someone with a terminal disease who will not help herself, and that has given her pain, she has given both Bill and Brooke the benefit of the doubt too many times, and she just cannot handle any more betrayal, heartbreak, or loss.

Katie feels like she has to stand up for herself and distance herself from Brooke. Brooke for some reason cannot stay away from her family members’ men – she even slept with her own daughter’s husband and that’s how Hope was born!

B&B Spoilers: Donna Logan Reminds Katie That She Was No Saint Herself

Donna reminds Katie that she was no saint herself, and nobody is perfect- she had destroyed Bridget Forrester’s (Ashley Jones) marriage to Nick Marone ( Jack Wagner) by sleeping with him, tried to stop one of Ridge Forrester’s (Thorsten Kaye) weddings to Brooke by pretending to faint and held a gun on Quinn Forrester (Rena Sofer).

Donna knows that Brooke intended to reconcile with Ridge and that Quinn was the one to mess things up by uploading that video – although she acknowledges that neither Bill nor Brooke exercised any self-restraint by making out like that. They both could have avoided the whole thing by doing the right thing and not indulging like that.

Donna is trying to be the peacemaker because she wants the three sisters to be sisters, not enemies and rivals. Katie, however, is not ready to even consider forgiving either Bill or Brooke, because she is too disappointed and betrayed; she needs some time to heal and get strong!