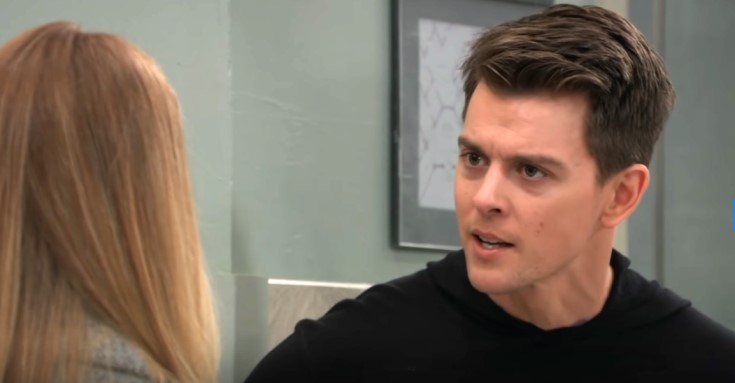 General Hospital spoilers tease that Michael Corinthos (Chad Duell) is stressed by Nelle Benson’s (Chloe Lanier) trying to move up the family court date in an upcoming episode of GH!

Subpoenas have already been issued for Wiley Corinthos’ (Erik and Theodore Olson) medical records related to his operation, specifically the parental permission form for the operation which mysteriously has gone missing from his file and as General Hospital viewers will recall, went missing, probably before it was scanned into the General Hospital electronic records system, seeing as Nurse Bobbie Spencer (Jacklyn Zeman) shredded it right after Wiley came out of surgery.

As if it weren’t bad enough that Nelle is denying that she ever signed the form, to begin with, and has had the court subpoena the form, now she is pressing the family court to move the date up as soon as possible because she is presenting them with the complaint that Wiley is not safe in the hands of Michael and his relatives because an operation was performed without her consent! Strangely enough, no one from Family Services has yet shown up to remove Wiley and place him in foster care, which is what usually would happen in a case like that!

But then, Nelle may contend, both the Corinthoses and the Quartermaines have some very deep pockets and Michael’s father, Sonny Corinthos (Maurice Benard) is a mob boss! But Michael knew that he would have to overcome Sonny as an issue – he was warned about that ahead of time by Attorney Diane Miller (Carolyn Hennesy), and in addition, he needs to find a wife whom the Family Court would deem suitable as well, Sasha Gilmore (Sofia Mattsson) who is Michael’s actual girlfriend having been ruled out because of the fraud she was involved in pretending to be Nina Reeves’ (Cynthia Watros) long-lost daughter.

This request of Nelle’s to move the family court date up pressures, Michael, to find a wife and to produce proof that she signed her name on the consent form for Wiley’s operation, which as far as he knows, she did and is just lying about it and probably stole the form out of Wiley’s file as well. He knows how sneaky Nelle can be, and he probably thinks she signed it with disappearing ink!

However, that trick is well documented in her criminal records concerning the gaslighting of Carly, although those incidents were not admissible in court and she was convicted in the murder of her ex-fiancé, even though she also planned to murder Michael. Detective Harrison Chase (Josh Swickard) had helped Michael in that case, having pretended to help Nelle rig Michael’s car to explode, but he was really working with Michael against Nelle and Nelle believed the car would explode before Michael and she got into his car together.

In addition, everything that went on in that car during that ride had been recorded including her admission that she had killed her ex-fiancé Zachary Grant, which had been the case that Chase was working on in Florida before following her to Port Charles after getting his police credentials restored. Nelle had seduced him which not only made the murder case be thrown out of court but lost him his career for the time being.

But somehow, none of this history seems to make a difference in who gets custody of Wiley! Michael will have to rush to come up with a suitable wife, and be ready to fight the complaints that Nelle claims she never authorized the operation and in record time, with no time for Michael and his attorney Diane Miller to even prepare for the case!

Days Of Our Lives Spoilers: Distraught Sarah Won’t Face The Truth – Fights For Custody Of Mickey