The Bold and the Beautiful Spoilers: Hope Intrigued By Thomas’ Change In Behavior, His Strategy Working 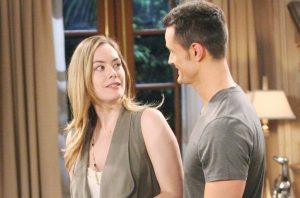 Hope Logan (Annika Noelle) has begun trusting Thomas Forrester (Matthew Atkinson) again on ‘The Bold and the Beautiful’. It’s taken a while, some planning, and even some honesty. But Atkinson’s character is making progress, as evidenced by Hope’s intrigue in his apparent turnaround.

The following isn’t a full slam on Thomas, as the man is actually trying to do better. But his initial plan was to get Hope back using his son, Douglas Forrester (Henry Joseph Samiri). So, some key fictional people on B&B, along with their millions of daily viewers, remain rightly skeptical of whatever Thomas is doing.

The Bold And The Beautiful Spoilers – Giving Thomas Forrester Some Credit

Thomas’ open talk with Hope at Forrester was a good step. He told her that he was and is hoping that she’ll give him a second chance.

Atkinson’s character waited to tell Hope that information until after he orchestrated a recent kiss between his sister, Steffy Forrester (Jacqueline MacInnes Wood) and Liam Spencer (Scott Clifton) in the backyard at the cliff house. And, after telling Hope that he still hopes for a future with her (yes, that’s a wink at Hope’s eponymous line he’s designing at Forrester Creations) Thomas then made plans with Zoe Buckingham (Kiara Barnes) for a night out in Hollywood, which included asking Hope to watch Douglas.

Along with the above, Thomas told Quinn Forrester (Rena Sofer) that she’d gone too far in spiking Brooke Logan’s (Katherine Kelly Lang) drink. Quinn was stunned that Thomas was being sincere, though he mentioned zilch about having spiked Liam’s drink with an aphrodisiac last summer. Sure, Liam isn’t an addict, whereas Hope has had alcohol problems, but fans understand the comparison.

Bold And The Beautiful Spoilers: Time For Taylor To Return – Thomas And Brooke's War Brings Her Back? https://t.co/CdrlTIeHhr

Thomas realized after the vat-plunge incident that he needed to back off Hope. Even he understood that the pressure he had been applying wasn’t working for him.

So, a change in strategy happened. While Thomas’ harshest critics on either side of the screen might not want to admit it, he is also working to control his behavior as well. Yes, Thomas needs professional help and likely a prescribed medication schedule. But he deserves his due for trying to even himself naturally.

Without being constantly hounded, Hope is seeing the positive sides of Thomas’ personality. His love for Douglas and kindness toward her is having an upbeat effect.

The apparent ‘Steam’ revival gives Thomas the exact opportunity he was hoping for. Hope’s vulnerability and proximity, due to being Douglas’ legal mother, creates increasing momentum that Thomas’ romantic feelings will be returned.

Zoe doesn’t deserve to be used by Thomas and she could react badly if the desired connection with Hope happens. Xander Avant (Adain Bradley) was aggressively pursued by Zoe after their breakup. How ironic would it be if Thomas becomes a target?

All of the above creates an engaging drama that’s not predictable, which makes for solid soap viewing.

Days Of Our Lives Spoilers: Will Struggles With Whether To Tell Maggie The Truth