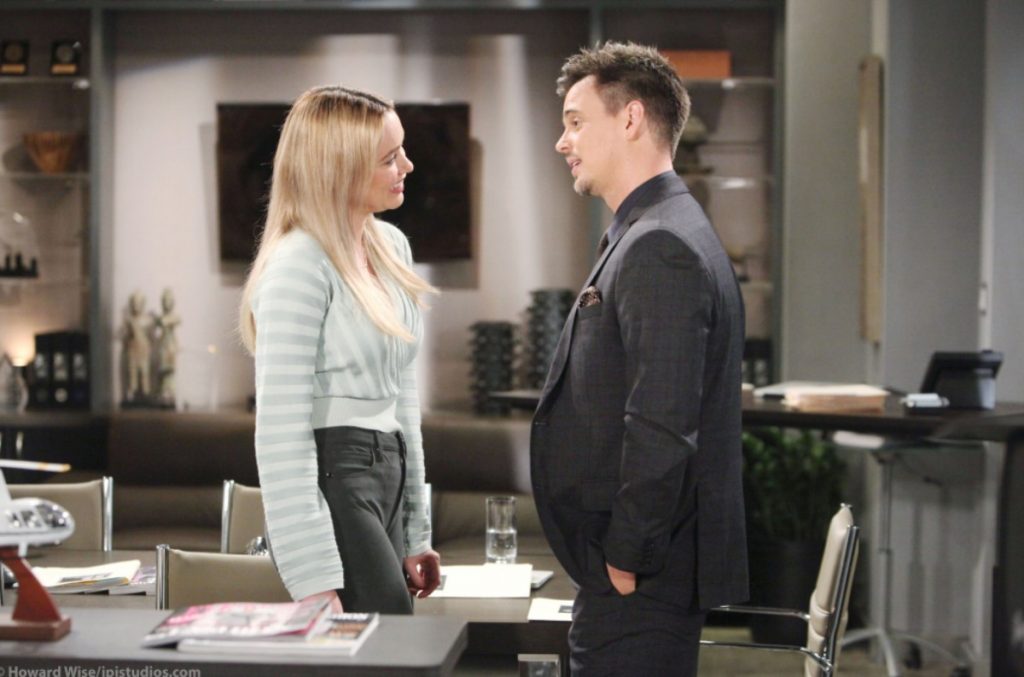 The Bold and the Beautiful spoilers for Wednesday, February 26, tease that Flo Fulton (Katrina Bowden) and Wyatt Spencer (Darin Brooks) will prepare to make a big sacrifice. As B&B viewers know, they both know about Sally Spectra’s (Courtney Hope) devastating terminal diagnosis, and they both want to help Sally in any way that they can. But the situation is a bit tricky since Sally doesn’t know that they know about her condition.

Wyatt desperately wants to be there for Sally, but he also doesn’t want to hurt Flo, because he truly loves Flo and wants to be with her. But he just doesn’t feel like he can turn his back on Sally right now, and Flo totally understands his dilemma. In fact, Flo suggested that they separate for the time being and that Wyatt go back to Sally for her final weeks of life.

The Bold and the Beautiful spoilers say that on Wednesday’s episode, Flo and Wyatt will spend a tender moment together as they prepare to make the ultimate sacrifice for Sally. It looks like they’ll decide that they need to go their separate ways for the time being, so that they aren’t sneaking around behind Sally’s back. It will be tough, but B&B spoilers say that they’ll both be willing to do this for Sally.

Meanwhile, on Wednesday’s new episode of B&B, it looks like Katie Logan (Heather Tom) will continue her conversation with Steffy Forrester (Jacqueline MacInnes Wood) and Ridge Forrester (Thorsten Kaye) in the Forrester CEO office. As B&B viewers know, Katie learned that Sally’s firing from Forrester Creations was imminent, and so she made the decision to tell Steffy and Ridge about Sally’s terminal condition.

Well, Ridge and Steffy are going to be stunned, as they try to process this terrible news. Katie will relay that Sally doesn’t want anyone to know about her condition and that her hope is that she’ll be able to continue working for as long as possible. Well, according to B&B spoilers, Steffy and Ridge will put their heads together and devise a plan to help Sally out.

Instead of going ahead and firing Sally, the Bold and the Beautiful spoilers say that Ridge will take it upon himself to finish some of Sally’s designs. B&B viewers will remember that Ridge noticed that it looked like Sally’s designs were half-finished, and it appears that he’ll finish the designs for Sally.

B&B spoilers say that Sally will be stunned on Wednesday’s episode when she finds out what Ridge did with her designs, and she’ll be even more stunned to learn that they’ll be included in the upcoming Forrester Creations couture collection. For Sally, this will be a dream come true, and she’ll be truly touched.

Of course, for Steffy and Ridge, they’ll get the satisfaction of helping someone who’s truly in a terrible spot. Thanks to Katie, Steffy, and Ridge, not only will Sally’s job be saved, but at least a version of her designs will be featured prominently in the Forrester couture collections, and she’ll know that she’ll “live on” in those designs.