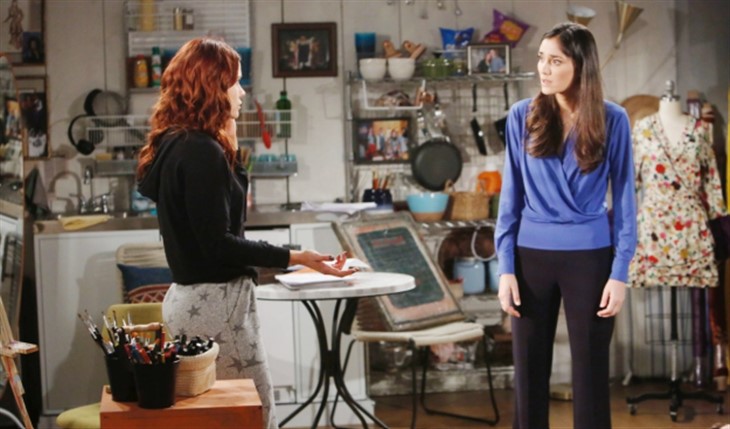 CBS The Bold and the Beautiful spoilers tease that Sally Spectra (Courtney Hope) might have a chance to escape justice if she can handle one particular problem. Penny Escobar (Monica Ruiz) is directly involved in the kidnapping of Flo Fulton (Katrina Bowden). But she’s also the person who knocked Flo unconscious, which was the initial crime.

Viewers recall that Penny agreed to go along with Sally’s wild terminal condition plan. The goal was to try and recreate Wally. But Wyatt Spencer’s (Darin Brooks) feelings for Flo prevented that from happening. Then, Flo fully realized what Sally and Penny were doing just as the last episode of B&B was broadcast in April.

The Bold And The Beautiful Spoilers – B&B Is Finally Back

Preview commercials intend to make sure all fans know that B&B will be broadcasting new episodes starting on July 20. That news has been welcomed by soap fans everywhere.

Revealed scene information winks that Sally and Penny are able to carry Flo out of Wyatt’s beachfront home. She’s then taken to Sally’s apartment and attached to a radiator in order to prevent escape.

The Bold And The Beautiful Spoilers: Wyatt Confronts Sally – Will Sally’s Secret be Exposed?

Sally is believed to begin pursuing a pregnancy plan. She wants to have Wyatt’s baby so that they will be tied together forever.

It’s an intriguing option that Sally is pressing toward. It could be possible that Wyatt feels so vulnerable, with Flo missing for an undetermined amount of time, that he takes comfort in familiar arms.

Whatever realization Wyatt has won’t matter if Sally becomes pregnant first. She’s battling time and with that will likely come to see Penny as a problem.

The Bold And The Beautiful Spoilers – Penny Escobar Redeems Herself?

Teasers indicate that Flo and Penny will vehemently encourage Sally to turn away from her plan. Whether Sally’s successful or not, Penny’s clarity of conscience indicates that other positive acts can be pursued.

Surely Penny will feel guilty about her actions. Having time to talk with Flo can also serve to reshape Penny’s outlook.

Along with Flo’s influence, Penny may come to decide that this entire arc has gone too far and that she needs to end it. Of course, if Sally becomes aware of Penny’s epiphany, then she’ll see her as the problem and their alliance will break.

The Bold And The Beautiful Spoilers: Wyatt Confronts Sally – Will Sally's Secret be Exposed?https://t.co/QSk8RVyYeT

Whether Penny is urged to leave town, to avoid arrest, or is dealt with in a far harsher manner is yet to be known. But long-awaited new episodes will soon inform viewers whose deep patience is soon to be rewarded.