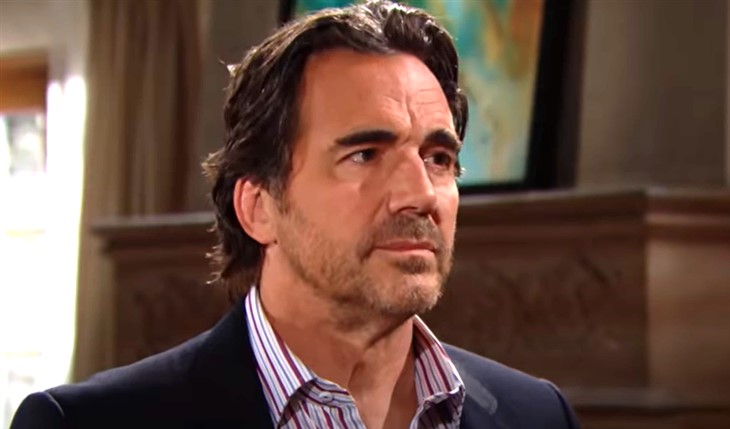 CBS The Bold and the Beautiful spoilers reveal that Ridge Forrester (Thorsten Kaye) learns he is married. He also doesn’t remember it because he was falling down drunk. He could easily fix the problem by getting his marriage to Shauna Fulton (Denise Richards) annulled. But instead, he decides to stay married to a woman he doesn’t love. What is his reasoning for this?

The Bold And The Beautiful Spoilers – Marriage Can Be Annulled

B&B spoilers reveal that the easiest way for Ridge to fix the problem is by having Carter Walton (Lawrence Saint-Victor) file an annulment. There are certain conditions that must be met for a judge to grant a marriage annulment. One is not being able to legally consent, which just happens to include being intoxicated.

Instead of asking Carter to get the marriage annulled, Ridge goes to inform Brooke about the wedding bombshell. Then, she gets another shock when Ridge tells her they are actually divorced, something else he doesn’t remember doing. Understandably, Brooke is furious, shocked and devastated. She tells him to get out and when Ridge says he loves her, Brooke just turns her back.

The Bold And The Beautiful Spoilers – Ridge Forrester Punishing Himself?

The Bold and the Beautiful spoilers reveal that Ridge decides to honor his commitment to Shauna. However, we don’t think it’s because he takes marriage vows seriously. We also doubt that he is curious if he can eventually love Shauna. It’s most likely that Brooke rejecting Ridge caused the designer to find a way to punish himself. What is worse than being married to someone you don’t love?

Eventually, Brooke will decide that she wants Ridge back. However, he will insist on staying loyal to his new wife. That will lead Brooke on a journey to learn the truth about what happened that night. There is a saying that what happens in Vegas stays in Vegas. But that person obviously never met Brooke Logan Forrester!

The Bold And The Beautiful Spoilers: Monday, August 17 – Quinn Gloats Over Brooke’s Loss – Ridge Tells Steffy About His Marriage To Shaunahttps://t.co/yWr2eUwgnR

Brooke will come up with the proof she needs to show Ridge he was conned by Shauna. The truth will set him free, but Shauna and Quinn Forrester (Rena Sofer) will have to pay the price. Could the punishment be more than losing the men they love? We will have to keep watching the CBS soap opera to see what happens with this storyline.

The Young and The Restless News Update: Eileen Davidson Spills About Her Return To Y&R And Life During COVID