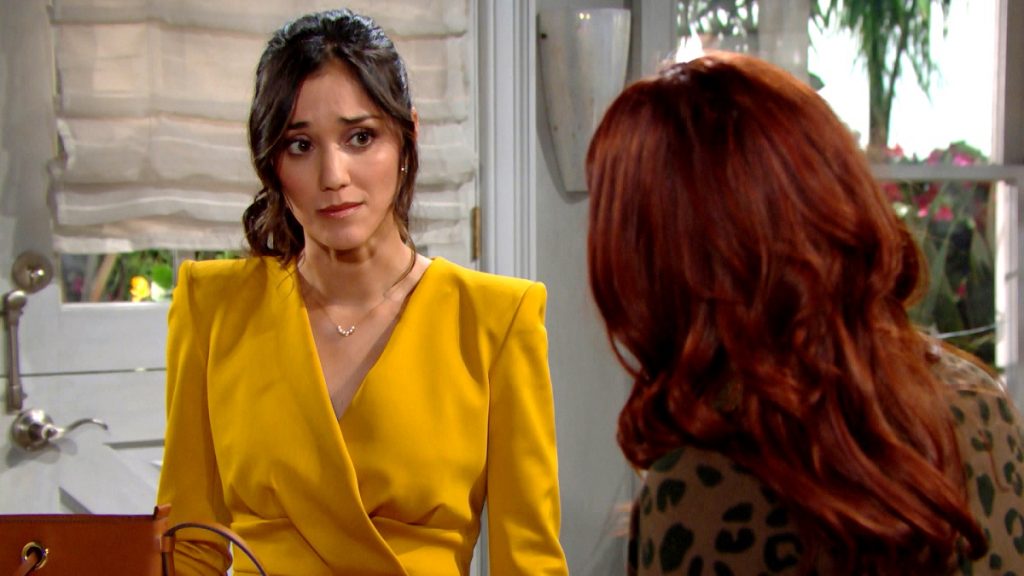 The Bold and the Beautiful spoilers reveal that Dr. Penny Escobar (Monica Ruiz) is in a tough position. She wants to stop the sickness scheme, but doesn’t want to risk Sally Spectra (Courtney Hope) targeting her either. It is teased Dr. Escobar makes a crazy decision that changes everything. Keep reading to find out what that could be.

B&B spoilers reveal that Sally insists on continuing her scheme, even though she’s not getting the results that she wants. She made a move on Wyatt Spencer (Darin Brooks) and told him how she really felt about him. However, he pushed her away and made it clear that he’s not interested in bouncing back and forth anymore.

Even though Sally roped Dr. Escobar into her sickness scheme, the physician really doesn’t want to be part of it anymore. Her guilt is eating her alive, but Sally has no intention of giving up. She plans to up the ante, but she might be in for a bit of a surprise.

The Bold and the Beautiful spoilers reveal that Flo Fulton (Katrina Bowden) went to Dr. Escobar out of concern about Sally not seeking treatment. However, she finds something in her office that raises a red flag. Dr. Escobar’s facial expressions, body language, and shutting down the conversation too quickly also make Flo suspicious.

Flo continues to push Dr. Escobar to come clean, especially after she kicks Sally out of the beach house. This leads to Dr. Escobar making a crazy decision that changes Sally’s entire game.

The Bold and The Beautiful Spoilers: Don Diamont Has Something To Celebrate! https://t.co/lUvy03BSMr pic.twitter.com/a4fPUDogyv

The Bold and the Beautiful Spoilers: Teaching Schemer a Lesson

It is suggested that Flo and Dr. Escobar might work together to teach Sally a lesson. If they can’t get her to confess the truth to Wyatt that she isn’t dying, then she will receive a shocking diagnosis.

Dr. Escobar could convince Sally to come in for a checkup because she “doesn’t look good.” Then, the doctor could lie to Sally and tell her that she really is dying. It would be a crazy plan, but it could be just what is needed to teach the schemer a lesson.

What do you think will happen with Dr. Escobar and Sally? Could Flo convince the doctor to teach the scheming designer a lesson that she will never forget? Fans will have to keep watching the CBS soap opera to see how this storyline develops.