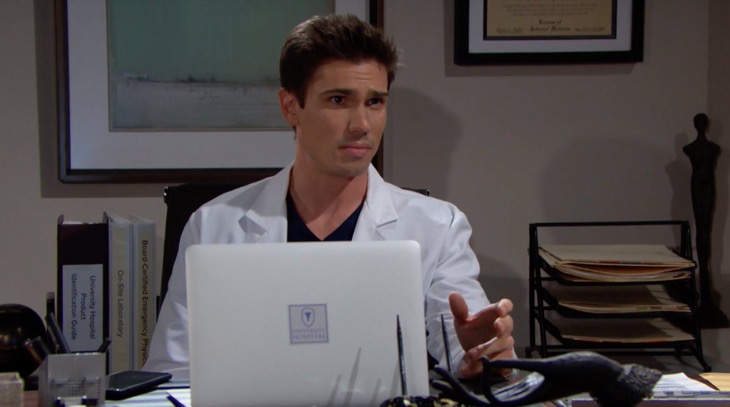 CBS The Bold and the Beautiful spoilers recap for Tuesday, September 15, reveal that Steffy Forrester (Jacqueline MacInnes Wood) was alone at the cliff house while Kelly Spencer (Colette and Avalon Gray) was out spending time with Hope Spencer (Annika Noelle). Steffy called John “Finn” Finnegan (Tanner Novlan) asking to see him. Finn answered at his office, and he agreed to come to see Steffy, but he said if this was about a prescription refill, he couldn’t do that.

Steffy was upset by this, but she didn’t tell Finn that she had secretly hoped to ask for another refill. Meanwhile, in his office, Finn hung up from his call with Steffy and Liam Spencer (Scott Clifton) showed up at the door asking if that was Steffy on the phone. Finn immediately knew who Liam was, but he said that he wasn’t at liberty to discuss Steffy as a patient.

The Bold And The Beautiful Spoilers – Concern For Steffy Forrester

Liam then asked if Steffy was ok, and he wanted to know how Finn thought she was doing. Liam said that he was pretty concerned about Steffy and that he was getting the feeling that Finn was, too. Finn indicated that he hadn’t prescribed any more pills for Steffy, and Liam noted that the pills could be addictive. Finn said that was true for any patient.

Finn then offered to give Liam some advice about how Steffy really needed to spend time with Kelly, and Liam winced at the fact that Finn knew Kelly’s name. Finn said that Steffy had opened up to him and that it was great that they had a tight-knit family, but that Steffy needed Kelly. Liam agreed with Finn about that, and Finn learned that Kelly was with Hope at the cabin.

Finn wondered if Liam was questioning his professionalism, but Liam said that he wasn’t. However, Liam said that he didn’t know how often doctors made house calls these days. Finn threw it back at Liam, saying that he was sure that Liam checked in on Steffy, too. Finn assured Liam that he’d do everything in his power to take good care of Steffy. 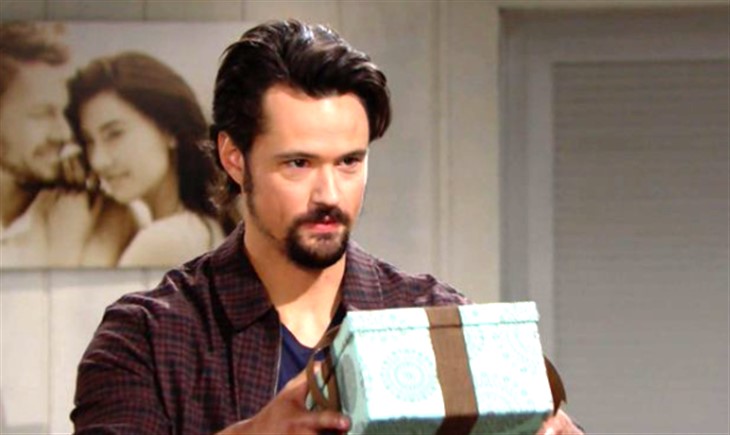 Back at the cliff house, Thomas Forrester (Matthew Atkinson) arrived with a couple of gifts. Vinny Walker (Joe LoCicero) had sent a bag of Steffy’s favorite coffee along with a wrapped box for Steffy. Thomas wanted to see Kelly, but Steffy said that Kelly was with Hope and Douglas Forrester (Henry Joseph Samiri) again. Thomas balked, saying that Steffy should put her foot down and be with her daughter.

Steffy argued that Kelly loved spending time with Douglas and Beth and that Hope and Liam were helping her by caring for Kelly. Soon, Thomas stepped away for a call, and Steffy opened the box from Vinny – it was a stuffed teddy bear for Kelly and under the teddy bear was a bottle containing a few pills. Steffy stared at the pills in disbelief.

Steffy then opened the card that was in the box, and it was a card from Vinny saying that the teddy bear was for Kelly. The card also said, “I heard you were out, and no one should be in pain.” Steffy thought for a while, and a text from Vinny came through on her phone. Vinny asked if Steffy got his gift, and Steffy replied, “What are you doing? These are illegal.”

The Bold And The Beautiful Spoilers – Steffy Forrester Hides Pills

Vinny replied, “Chill. Same as your doctor gives you.” Vinny went on to say that Steffy shouldn’t be in pain and that it would be their secret. Thomas then returned from his call, and Steffy hid the pills from him but showed him the teddy bear for Kelly. Thomas said that Vinny keeps saying that he wishes there’s more that he can do. Steffy said that Vinny’s done more than enough.

Later, after Thomas had gone, Steffy contemplated her pain as she looked out the window. Steffy gazed at the pill bottle from Vinny and looked upset.

At the Forrester CEO office, Carter Walton (Lawrence Saint-Victor) talked with Zoe Buckingham (Kiara Barnes). Carter was happy to see Zoe, and she noted that she had been very busy lately. Zoe had some designs for Steffy to look at, and Carter and Zoe talked a bit about Steffy’s recovery. Zoe said that she was going to take the designs to Steffy’s house later.

Zoe wondered how Carter had been doing, and Carter said he was much better now. Carter admired the design photographs of Zoe, and Zoe quipped that Carter should see her first thing in the morning. Zoe then blushed and smiled. After some more flirting, Carter said that he couldn’t stop thinking about Zoe and that it had been some time since he felt this way about a woman.

Carter said that he usually didn’t wear his heart on his sleeve and that he liked how things were between them. Carter and Zoe talked about seeing more of each other, and they each acknowledged that they hadn’t been lucky in love, but that seemed to be about to change for both of them. Carter and Zoe smiled happily at each other.

There’s a lot of B&B drama heating up, so stay tuned! Check back with us here at SOS for all your soap spoilers and news, and we’ll keep you updated on the latest Bold and the Beautiful daily episode recaps as well. We’ve got you covered!

Days Of Our Lives Spoilers: Marlena Warns Claire About Jan, But Is It Too Late?