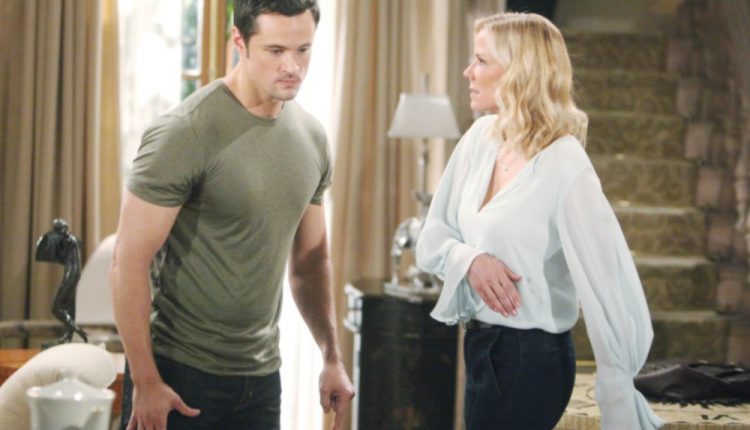 The Bold and the Beautiful spoilers document that Thomas Forrester (Matthew Atkinson) despises Brooke Logan (Katherine Kelly Lang) as much as Quinn Forrester (Rena Sofer) does. Viewers recall that Brooke’s adversaries have spoken about their mutual hope to get rid of her. Now, plot dynamics indicate a diabolical can be taken.

One way this can happen is if Thomas and Quinn exploit Brooke’s history with alcoholism. Atkinson and Sofer’s characters are not below doing something so vile.

The Bold And The Beautiful Spoilers – Telling References And Camera Shots

Eric Forrester (John McCook) recently pointed out to his wife that they need to support Brooke and Ridge Forrester’s (Thorsten Kaye) efforts to repair their marriage. After Eric talked through the reasons why Shauna Fulton (Denise Richards) needed to leave the guest house, he also referenced Brooke’s past states of mind when she was apart from Ridge.

The alcohol reference he made is well-known by longtime fans. Brooke’s past battles were fierce with eventual victories, but plenty of damage created along the way.

Savvy viewers noticed a lingering camera shot on Lang’s hand as she placed a glass on a table in her living room. The liquid was clear, undefined, and provided a certain implication.

Quinn slapped Brooke across the face in retaliation for her having done the same to Shauna. That message went beyond protecting a friend, as Sofer’s character openly declared battle against Brooke.

Viewers recall the unlikely, yet realized, the scenario when Sheila Carter (Kimberlin Brown) was allowed to remain at the estate. Quinn believed Sheila was faking and, or extending her supposed injury. Later, both ladies fought physically with Quinn emerging the victor and realizing Sheila’s ouster from Queric’s home.

So, Brooke fans know that she’s in for a fierce fight with Quinn, before even considering Thomas’s dark influence.

Brooke recognized that Thomas was unbalanced after his return from New York. Ridge refused to recognize reality, only later admitting that his son made mistakes and needed support in order to improve.

Thomas wants Brooke out of his father’s life and erased from Forrester Creations. Quinn was just reminded of the soft spot Eric has in his heart for Brooke. So, it is fully in Thomas and Quinn’s self-interests to bring about Brooke’s downfall. What better way than to topple Brooke than by having her defeat herself. And so, the alcohol angle is prime to be played.