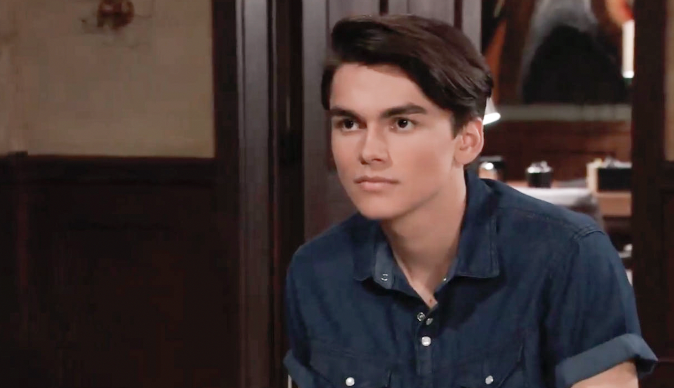 Now that Brando Corbin (Johnny Wactor) has turned up alive and saved the life of Carly Corinthos (Laura Wright) at the Corinthos Coffee warehouse, Dev Cerci, (Ashton Arbab) his fake son, has some questions!

At the Corinthos house, as Jasper Jacks (Ingo Rademacher) and Josslyn Jacks (Eden McCoy) look on, he asks someone – probably Michael Corinthos (Chad Duell) – now that Gladys Corbin’s (Bonnie Burroughs) son is alive, what does that mean for him?

At General Hospital, Willow Tait (Katelyn MacMullen) approaches Brad Cooper (Parry Shen) as he is ready to board an elevator and gives him a warning about Nelle Benson Archer (Chloe Lanier)! Willow tells Brad that either he finds a way to manage Nelle, or she will! Willow leaves no doubt with Brad that she means what she says, and says what she means! She doesn’t want Nelle anywhere near Wiley Cooper-Jones (Erik and Theodore Olson)!

Meanwhile, over at the Quartermaine mansion, Nelle stands up to Brooke Lynn Ashton (Amanda Setton) who doesn’t even want to let her set foot through the door! Nelle is firm with Brooke Lynn when she tells her that Michael invited her to live there! What she doesn’t know yet is that she’s not living in the Quartermaine mansion – Michael set up the boathouse for her to live in!

Longtime General Hospital viewers will recall that this is not the first time the boathouse has been used as a guest house, many people have lived in it over the years and it has even been used as a temporary morgue of sorts – anybody remembers Anthony Zacchara (Bruce Weitz)?

Gladys visits her not-so-dead son, Brando, in his hospital bed at General Hospital and has some questions for him. She looks a bit upset when she leans over and whispers, “What are you doing in Port Charles?!” General Hospital viewers and the rest of Port Charles want to know the answer to that question as well, as well as why Gladys told everyone her son was dead to begin with, Carly for one!

Nikolas Cassadine (Marcus Coloma) visits his mother, Laura Collins (Genie Francis) in her hospital room at General Hospital, where she is recovering after surgery to remove a bullet after being shot in the attack that was meant for Michael Corinthos.

It sounds like he may be talking to her about his mistakes in not telling his friends and family, including and especially his son Spencer Cassadine (Nicolas J. Bechtel) that he had survived, instead of keeping his survival a secret for over three years.

He is obviously worried Spencer may never forgive him as he tells his mother, “Now, that I finally understand that, it may be too late!” General Hospital viewers will recall that his reunion with Spencer didn’t go as planned at all, with Spencer being angry enough to disown his father and not want anything to do with him at all!