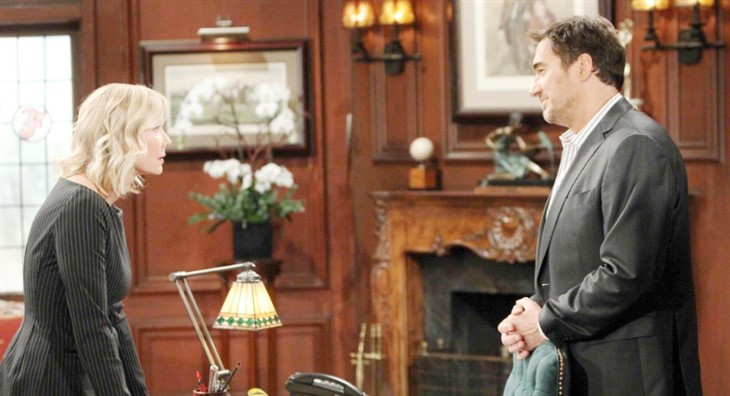 The Bold and the Beautiful spoilers tease that Brooke Logan (Katherine Kelly Lang) would be stunned if she learns that, as rumored, her husband, Ridge Forrester (Thorsten Kaye), married Shauna Fulton (Denise Richards) in Las Vegas, Nevada. That could lead to Brooke becoming seriously depressed.

Richards was recently interviewed and appeared to confirm that Shauna’s night on the town with Ridge resulted in some form of realized nuptials. Viewers will need to see the full clarification of what exactly happened when new episodes begin to air, possibly as soon as mid-July.

Whether that presumed marriage would be valid is debatable, as both parties may not have been fully in control of their faculties.

As far as B&B fans knew, Ridge was still married to Brooke when he went to Vegas with Shauna. Kaye’s character was enraged after learning that Brooke kissed Bill Spencer (Don Diamont). Ridge impulsively decided to call off the Bridge reunion and was interested in pursuing the start of a relationship with Shauna.

Viewers next saw Ridge telling Shauna that he wanted to visit her world. They did and a good deal of mutual drinking appears to have happened, as Shauna wouldn’t have married Ridge knowing that he was still legally tied to Brooke.

In effect, Ridge’s trip to Vegas was partially to spite Brooke. It’s true that Ridge’s feelings for Shauna have developed this year. But he put strict limits on his friendship with her and admitted to Brooke that he’d kissed Shauna on multiple occasions.

Ridge was believed to still be holding signed divorce papers when the audience last saw him in late April. So, B&B may have Ridge mention that he filed the legal documents before he took the trip to Nevada. If that’s the case, then he won’t have committed a crime.

Brooke believed that she’d saved Ridge from himself and Shauna’s influence in having had the company pilot locate and bring him back from Vegas on the Forrester Creations corporate jet. His revealed marriage to Shauna, if this projection is proven to be accurate, would naturally devastate Brooke.

The Bold And The Beautiful Spoilers: Filming Updates – Have Spouses Or Dolls Been Used Yet? https://t.co/TJOQzSbK1h pic.twitter.com/Q2Sr0Ngcn9

Lang’s iconic character wouldn’t be able to immediately focus on the many times that she and Ridge have eventually reconciled after numerous breakups and divorces. Instead, she’d likely be devastated and could fall into a deep depression.