The Bold and the Beautiful Spoilers: Brooke Loses Control – Quinn To Blame For Latest Downfall? 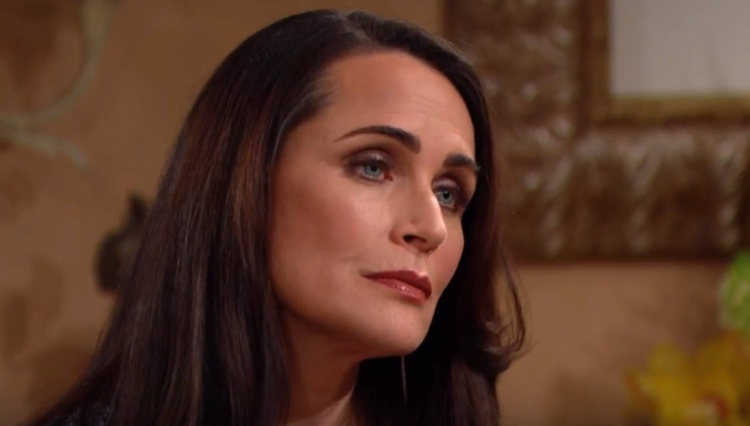 The Bold and the Beautiful spoilers reveal that Brooke’s (Katherine Kelly Lang) life could be endangered by alcohol if she drinks again while she’s under the stress and strain of what has become a train wreck life.

There is no doubt that she is under tremendous pressure and alcohol is one of her worst enemies, along with Quinn (Rena Sofer). If Brooke is tempted to drink, her current frenzy and rage will be out of control and could spell doom.

But, is it also possible that Quinn be could the direct or indirect result of Brooke going off the rails while under the influence of alcohol?

There is no doubt that Brooke could be tempted to drink given the ruckus she is kicking up, much of it at her own expense. She has a list of enemies and unacceptable life conditions and right now she’s on a tear trying to get both of these under control.

It could be argued that her current mess of a life has been instigated solely by her. She sunk her marriage by insisting that Ridge (Thorsten Kaye) choose her over his son Thomas (Matthew Atkinson).

While Thomas is a bit unhinged, Ridge loves him and can’t just cut him loose while he’s in need of help.

Second, she’s made a pair of vicious enemies in the form of Quinn and Shauna (Denise Richards). Yes, Shauna kissed Ridge during his separation from Brooke, but he wasn’t exactly fighting her off.

This is a fact Brooke has blithely ignored while going after Shauna, who just happens to be Quinn’s best friend. Why didn’t Brooke slap Ridge for the forbidden kiss, like she slapped his accomplice?

It would be a calamitous event if Brooke started boozing again, but that is exactly what it looks like could end up happening. And spoilers reveal that there is a deliciously demented way in which this catastrophe could come about!

Quinn has made no secret of her desire to ruin Brooke’s life, and her husband Eric (John McCook) may have given her the perfect ammunition.

He has been in the middle of his ex and his current wife and done an admirable job of trying to keep the peace. But he may have slipped up when he told Quinn that it would be horrible if Brooke started drinking again.

Quinn was quick to look at her little liquor collection, and we all know how deviously her mind works!

Is it possible that Quinn will “accidentally” slip Brooke some booze, and cause her to fall off the wagon? Don’t put anything past her!

The Young and the Restless Spoilers: Victoria’s Past Comes To Light – New Connection With Amanda’s Ex?