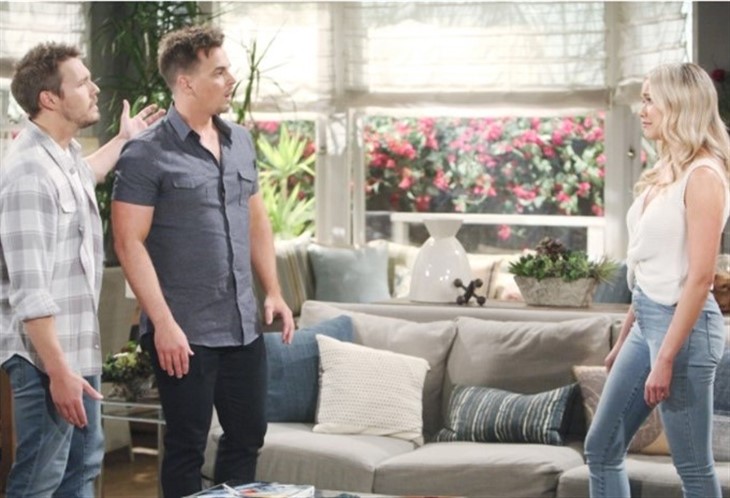 The Bold and the Beautiful spoilers and rumors reveal that in Los Angeles a new love triangle will be forming with Wyatt Spencer (Darin Brooks), Flo Fulton (Katrina Bowden), and Liam Spencer (Scott Clifton).

Upcoming previews say that Wyatt will be spending a lot more time with his brother Liam. With Liam going through difficult times, Wyatt feels the need to be there for his brother.

Liam is facing the harsh reality that his ex Steffy Forrester (Jacqueline MacInnes Wood) is moving on with her new man Dr. John “Finn” Finnegan (Tanner Novlan). Although Liam is married to Hope Logan (Annika Noelle), his jealousy towards Steffy and Finn is driving a wedge in their relationship.

It’s only a matter of time before Hope and Liam split, and with Steffy unavailable Liam may turn to another woman.

With Wyatt and Liam spending more time together, that means Flo’s going to have more interactions with Liam. Liam still has anger towards Flo for her role in the baby switch involving his daughter Beth Spencer (Madeline Valdez). However, as soap fans have seen, characters can be forgiven.

After getting to know Flo better, Liam will see her in a different light. A bond will form between the two and before long a romantic attraction will be blooming.

Flo has said that Wyatt is her true love, and she fought for them to be together. Yet, in soap operas, all couples don’t live happily. Flo and Wyatt are already experiencing drama with their mothers’ feud. Tension’s bound to develop between the two leading to arguments.

This will then set in motion Flo finding comfort from Liam.

This wouldn’t be the first time that Wyatt and Liam have fought over a woman. Their first go-around occurred when Wyatt began dating Hope.

A jealous Liam set out to break up the pair, even after they got married and Hope became pregnant. After Hope miscarried her and Wyatt’s baby, she turned down Liam and left Los Angeles. Wyatt and Liam would then go on to feud over Steffy. After Wyatt’s mom Quinn Fuller (Rena Sofer) kidnapped Liam and made it look like he left Steffy, the Forrester heiress grew closer to Wyatt.

Shortly after Wyatt and Steffy’s beach wedding, Liam returned to reveal Quinn kept him hostage. He also set his sights on reuniting with Steffy, although she was adamant about staying with Wyatt. However, much like with Hope, Steffy eventually divorced Wyatt to get back with Liam.

Wyatt and Liam haven’t always had the best relationship, but in recent years the two have become closer. But fans believe that bond may be broken once again due to Flo.

Wyatt has already lost two women to his brother. He’s finally found happiness with his high-school sweetheart Flo and is ready to make a life with her. Yet, if Liam becomes part of their orbit, one should expect a B&B love triangle.

The question is, which brother will Flo choose?