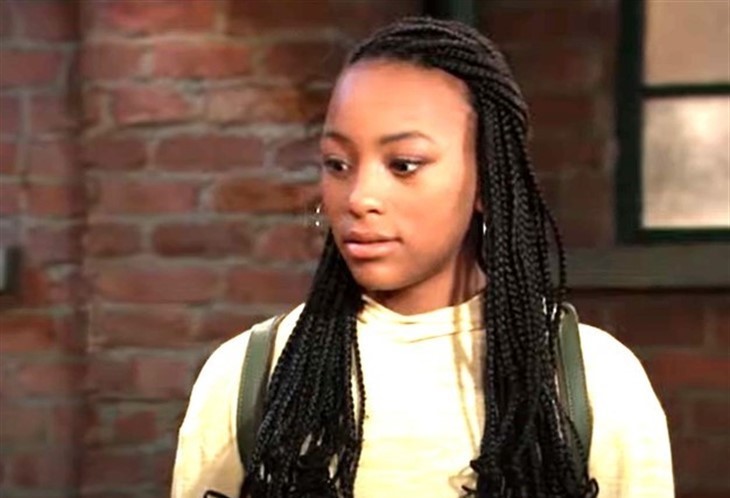 General Hospital (GH) spoilers tease that in Port Charles, NY Trina Robinson (Sydney Mikayla) continues having a difficult time accepting the death of her father, Marcus Taggert (Real Andrews). She’s determined to clear his name for forging the evidence that put Cyrus Renault (Jeff Kober) away originally. The truth is that

Taggert is indeed guilty of that crime, but only because he wasn’t able to produce real evidence, even though Cyrus was guilty of all the crimes he was accused of. Cyrus eventually was able to get his revenge by kidnapping Trina, as well as Cameron Webber (William Lipton). Cyrus’ plan was to draw Taggert out, and he did. Taggert got shot and apparently died not long afterward at General Hospital.

As viewers know, there was more to the story. With the help of Epiphany Johnson (Sonya Eddy) and Jordan Ashford (Brianna Nicole Henry), Taggert faked his death so that Cyrus would leave Trina alone. The plan worked. But now more and more people are finding out that Taggert is actually alive. The most recent person to discover the truth is Ava Jerome (Maura West). This could easily cause problems between Ava and her young protégé.

Trina took on a job at Ava’s gallery awhile back, interning for Ava. Ava has been teaching Trina all about the art world and the two of them have gotten close. At first Trina’s mother, Portia Robinson (Brooke Kerr) was against Trina and Ava’s working relationship, but Portia has come to see that working at the gallery with Ava has been good for Trina. And the truth is, it’s been good for Ava as well.

Ava lost her daughter, Kiki Jerome (Hayley Erin) when Ryan Chamberlain (Jon Chamberlain) murdered her. So her friendship with Trina has helped Ava heal. But if Ava continues to withhold the information about Taggert from Trina, then this relationship could be in trouble as well.

Ava is now faced with a difficult situation. She will have to work alongside Trina, without letting the teenager know her father is alive. But if she tells Trina and the news also somehow gets back to Cyrus, there is nothing to stop Cyrus from targeting Trina once again. So in order to keep Trina safe, Ava will most likely have to keep the truth from Trina even though Trina will likely hate her for it.

Should Ava tell Trina the truth? Or is this one secret that is better kept? Will Ava choose to keep Trina safe and risk Trina’s anger? Exciting times are coming to Port Charles, so stay tuned to General Hospital airs weekdays on ABC. And don’t forget to check back right here regularly for all your General Hospital news, information, and spoilers!