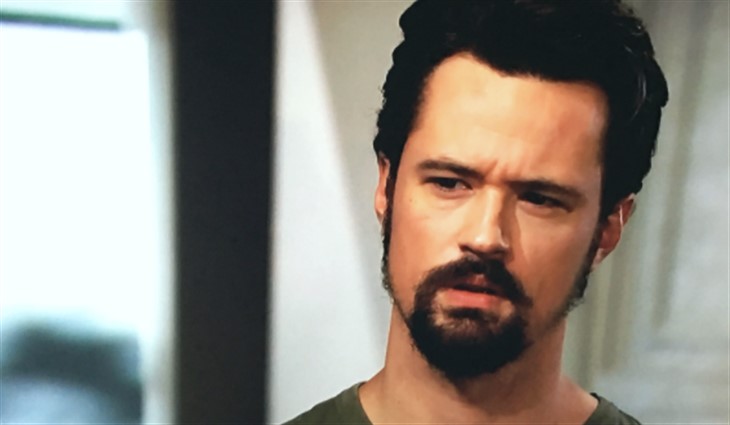 CBS The Bold and the Beautiful spoilers recap for Thursday, September 17, reveal that Steffy Forrester (Jacqueline MacInnes Wood) and John “Finn” Finnegan (Tanner Novlan) finished their kiss at the cliff house. Finn said that he didn’t see that coming, and Steffy said that she had to do it because Finn said that she couldn’t be his patient anymore because of how he felt about her. “Did that kiss open your eyes a bit to how I feel about you?” Steffy asked.

Steffy said that Finn was the kind of caring, compassionate person that she wanted in her life. Finn admitted that Steffy made his heart race, but that if that complicated things, he’d never let it get in the way of her care. “Do I need to kiss you again to show you it doesn’t bother me?” Steffy said with a smile.

Steffy then said that she wanted Finn to stay as her doctor and whatever else he may end up being. “There’s no way I’m letting you walk away from me at all,” Steffy said. Finn said that they had already had some beautiful moments when Steffy opened up to him about her family, her daughter, and her time with Liam Spencer (Scott Clifton).

Finn said that he was grateful for all of that and that Steffy was willing to continue being his patient, and that he was looking forward to spending more time with her and opening up himself. “When u looked into my eyes that first day, I knew I was going to be ok – that I could fight to get better,” Steffy said, before kissing Finn once more.

In the Forrester CEO office, Thomas Forrester (Matthew Atkinson) and Liam continued their heated argument over Steffy. Thomas needled Liam about how it felt to be the jealous one, and Liam insisted that this had nothing to do with jealousy. Thomas blasted Liam for being the one who threw Steffy away just as Ridge Forrester (Thorsten Kaye) walked in.

Thomas told Ridge what was going on, and that Liam was jealous of Steffy’s doctor. Thomas and Liam continued arguing, and Liam thought that Finn had crossed some ethical lines by being interested in Steffy romantically. Ridge thought that perhaps Liam was getting ahead of himself. But Liam said that Finn was making “wildly inappropriate extracurricular visits” to Steffy that put Steffy in an awkward position.

The Bold And The Beautiful Spoilers: Friday, September 18 – Steffy Hides Her Pain Pills – Hope Calls Out Liam On His Reaction To Steffy & Finnhttps://t.co/dCCK8E7yK4

Thomas said that if there’s someone who couldn’t be objective, it was Liam and that Liam’s just scared that Steffy is going to move on with another guy. Thomas blasted Liam for Steffy’s emotional vulnerability by playing Steffy and Hope Spencer (Annika Noelle) off of each other for years. “You could have picked one, but you didn’t, you’re too conceited,” Thomas bellowed.

Thomas went on, yelling at Liam to back off of Steffy and that Steffy isn’t his. “Let her go, Liam, let her finally find some happiness!” Thomas insisted.

That was a terrific episode of B&B, and there’s plenty more coming tomorrow, so stay tuned! Stick with the

CBS soap and don’t forget to check CDL frequently for the latest Bold and the Beautiful spoilers, news, and daily episode recaps. We’ve got you covered!