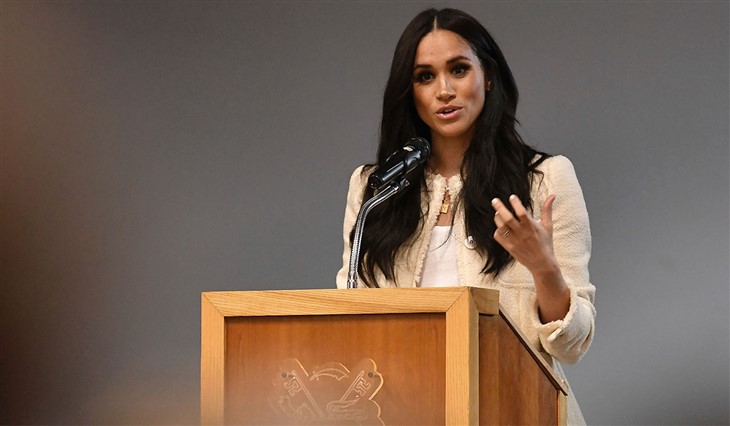 Crazy Town has arrived in the form of Royal commentators waxing on and on about the glories of Meghan Markle’s speech-making skills and her soon to be rising star. For those who don’t know, Mark Borkowski, a PR expert in the U.K. has suggested of Meghan Markle that, “In the short, immediate term she could be the most sought-after speaker in the world. Brands want to learn from high-profile people, so having someone like that in the room, it can boost publicity and draw delegates.”

Mr. Borkowski went on to sing Meghan Markle’s praises, and one honestly wonders whether, as a PR expert, Meghan paid him to do so. To be fair, Meghan Markle and her husband, Prince Harry have signed with the Harry Walker Agency in New York. This firm is well-known for signing celebrities and high profile political figures such as former presidents Bill Clinton and Barack Obama.

Reportedly, on the high end, it’s speculated that Harry and Meghan could earn upwards of $1 Million each per speech. That could be just a touch of hyperbole, however, given the fact that the Clintons and Obamas only manage to pull in an average payday of $210,795 for each address.

In any case, while it’s true that Meghan’s gotten pretty loud about her politics in the various speeches she’s delivered of late, she has yet to be paid for even one! Moreover, so far, neither Meghan nor Harry has been booked for engagements anywhere in the world by the Harry Walker agency. Therefore, Mr. Borkowski’s gushing comments regarding Prince Harry and Meghan being a “Billion dollar brand” just maybe a tad premature.

As many know, Prince Harry and Meghan Markle were making plenty of money before “Megxit.” Indeed, Meghan was making around a half-million dollars per year from her role on the hit TV series, “Suits.” According to reports, she also made a hefty sum from endorsements, etc. As for his part, Prince Harry received money from the Sovereign Grant for whatever he did as a senior member of the British Royal Family.

Following Megxit, Harry and Meghan together are receiving funds from Prince Charles’s Duchy of Cornwall to the tune of $2.5 Million per year. That hardly qualifies as a “Billion Dollar Brand,” but it’s also nothing to sneeze at … especially considering the fact that neither Prince Harry nor Meghan Markle is doing anything to earn that cash.

All in all, most people see two extremely privileged individuals living it up in L.A. while the world is on lockdown due to the Coronavirus pandemic. British and American citizens are lectured on social justice, the environment, and more as Prince Harry and Meghan jet set (in private jets), tool around downtown in gas-guzzling SUVs, and generally adopt a “Do as I say, not as I do” attitude.

The bottom line is that Mr. Borkowski just might be living in a bubble if he believes the masses are going to care one whit what Prince Harry and Meghan Markle have to say if they continue to behave like ultra-privileged, snot-nosed brats.

Sure, some executive somewhere who thinks listening to Harry and Meghan, two people who have lots of opinions but no expertise to back them up might wish to book a speech because … status.

But let’s face it, booking Harry or Meghan is like booking Greta Thunberg to make a speech on quantum physics.