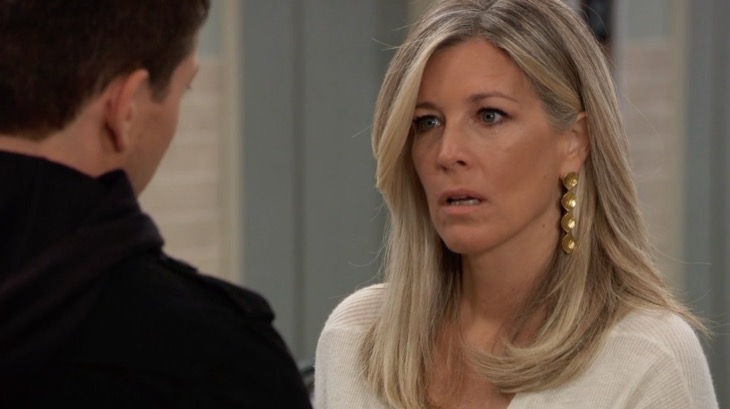 General Hospital spoilers tease that there will be five key takeaways for fans to look for in this week’s GH, from Monday, March 30 through Friday, April 3!

Molly will ask Brando Corbin (Johnny Wactor) for help finding TJ! General Hospital viewers will recall that until last Friday’s episode, Jordan had left everyone out of the loop about TJ’s kidnapping, under pressure from Cyrus Renault (Jeff Kober) to work for him as a dirty cop! Jason Morgan (Steve Burton) will give Sam a stern warning not to try to find TJ on her own, and he will want to put a little distance between himself and Sam for safety’s sake.

2) Mike Corbin Deteriorates After A Fall

Sonny Corinthos’ (Maurice Benard) father, Mike Corbin (Max Gail) continues to deteriorate at General Hospital after a fall at Turning Woods Memory Care Center where he only sprained his wrist. Sonny is advised that Mike refuses to try to get up and move around, or even standstill. Dr. Portia Robinson (Brook Kerr) thinks it is a symptom of his Alzheimer’s Disease going into its final stage, which shakes up Sonny.

Mike is also very disoriented and appears frightened. Sonny will be afraid that he is failing his father because he cannot shake him out of it and may regret not enrolling him in the Alzheimer’s experimental treatment trial in Manhattan the day that he, Mike, and Jason were attacked at the bar in Bensonhurst.

There will continue to be drama over Wiley Corinthos (Erik and Theodore Olson) both over his custody and his medical issues, as the week starts out with Dr. Monica Quartermaine (Leslie Charleson) having good news about Wiley – after Nelle Benson (Chloe Lanier) had refused to sign the paperwork allowing him heart surgery to close up the hole in his heart, which is a congenital defect passed down from Michael Corinthos (Chad Duell).

Monday’s preview shows Sasha Gilmore (Sofia Mattsson) wondering why Nelle changed her mind, and it’s highly likely that when Carly Corinthos (Laura Wright) locked Nelle out on the roof of the hospital in Friday’s episode, that she forged her signature!

Nelle will confront Carly about this after the surgery is completed and Wiley is out of danger! Meanwhile, Nina Reeves (Cynthia Watros) also has a plan to help get Nelle out of the picture so that Wiley’s sole custody will be with Michael, although Jasper “Jax” Jacks (Ingo Rademacher) is wary of the decisions made at Crimson since Nina hired Nelle, and Ava Jerome Cassadine (Maura West) cautions Nina.

4) Trina Robinson Continues To Experience Fallout From Her Trauma

Trina Robinson (Sydney Mikayla) will continue to experience fallout and after-effects from her trauma, when she was kidnapped by Renault’s goons and forced to watch her father, Marcus Taggert (Réal Andrews) shot and later died. Curtis Ashford (Donnell Turner) will want to know more about Taggert, and there’s a good chance he will ask Portia, and Trina will be angered by what she overhears. Trina will also confide in Ava about her feeling she messed everything up between Cameron Webber (William Lipton) and Josslyn Jacks (Eden McCoy).

General Hospital Spoilers: Will Willow Listen to Jason and Stay Away from Harmony? https://t.co/G3fUVvNZth pic.twitter.com/X8SIWBWn3U

Cyrus will feel the heat when Mayor Laura Collins (Genie Francis) tells District Attorney Robert Scorpio (Tristan Rogers) that she has some plans of her own where Cyrus is concerned, and she and Robert face him down! Meanwhile, Jordan will remain conflicted about the plan that Curtis, Sonny, and Jason talked to her about in Friday’s episode about exonerating Cyrus so he would be out in the open and more vulnerable to be taken down for good.

That’s all for this week’s Five Key Takeaways from General Hospital; stay tuned to the show, and keep checking General Hospital spoilers frequently for all the latest news, updates and developments!