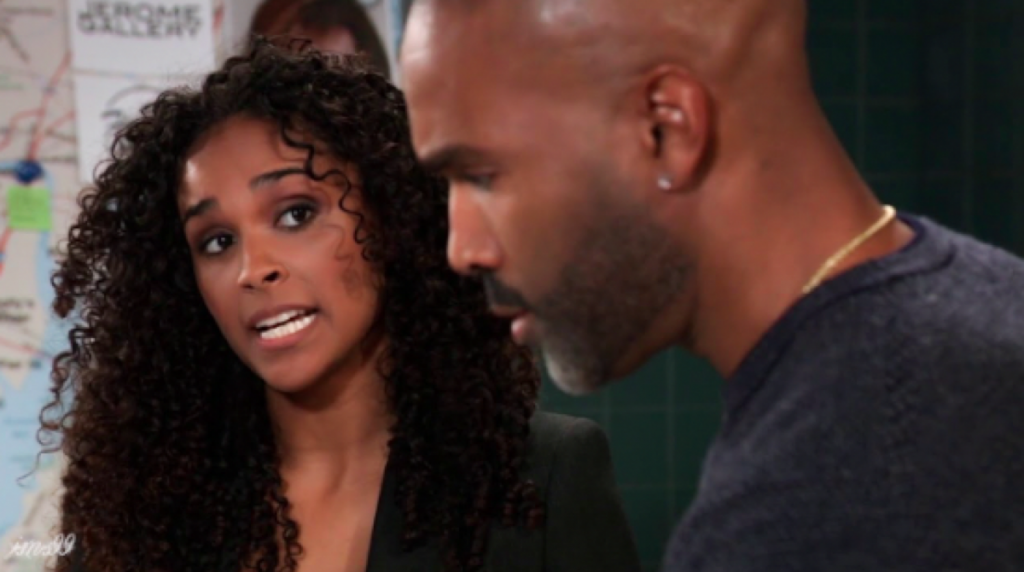 However, Curtis knows that there’s still something that Jordan hasn’t told him, as he asks pointedly, “Something you’re still not telling me, isn’t there?” He may not even want to know how much she hasn’t told him!

Oh my god!” Ava is Lucas Jones’ (Ryan Carnes) biological aunt, so of course, she should be informed, and by her only living brother, who now is no longer a grandpa so he’s experienced a loss too with the revelation that Willow’s baby died and “Wiley” is really Jonah Corinthos. So far, Brad Cooper (Parry Shen) hasn’t revealed the truth that Julian has actually known this for quite some time!

Meanwhile, still at the Corinthos house, Lucas doesn’t know how to let go of Wiley even though he was the one who broke the news that Michael Corinthos (Chad Duell) is really the baby’s father; Lucas will still be included in his life since he is still Wiley’s adoptive uncle, but it will be quite an adjustment for both him and the baby, who Michael has decided to call Wiley instead of the name Nelle Benson Archer (Chloe Lanier) gave him, Jonah.

Wiley is around eighteen months old and he knows his name and answers to it and can even say short sentences so that is probably best. He’ll have enough confusion to deal with although he already has been spending quite a bit of time with Michael as his godfather. Carly Corinthos (Laura Wright) looks on understandingly as Lucas looks lovingly at the baby.

Sonny Corinthos (Maurice Benard) didn’t hear all of the conversations at his house since he and Jason Morgan (Steve Burton) were handling other business when this all came down, and Sam McCall (Kelly Monaco) had called Jason about the Wiley is Jonah revelations.

Sonny’s back home now and asking Michael how Brad got his hands on his son in the first place, so the whole story will have to be explained to Sonny. Jason will likely be caught up on the whole story as well.

Behind bars, Nelle has accusations – she hisses through the bars at Brad who has also been arrested, “You stole my child!” Brad is in shock as he realizes Nelle is totally throwing him under the bus! He may have to ask for Julian’s help after all because Julian knew the whole story also – fat chance! There’s always Liesl Obrecht (Kathleen Gati), who also knows!

At General Hospital, where Detective Harrison Chase (Josh Swickard) hand-delivered – well, in his arms delivered – an unconscious Willow after Nelle knocked her out in her apartment, she is recovering from her mild concussion when Chase has to tell her some terrible, terrible news. She screams in agony as he explains that the Wiley she has gotten attached to is really Michael’s son and hers is the one who died from sudden infant death syndrome!