General Hospital Spoilers: Wiley Might Be In Safer Hands With Nelle Than Michael 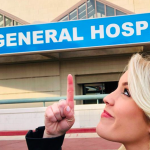 The truth is, while Nelle is an incredibly dark GH character, it’s also true that Michael and the entire Corinthos crime family have recently been targeted by Cyrus Renault (Jeff Kober)! Consider the fact that Cyrus’s henchmen attempted to assassinate Carly Corinthos (Laura Wright) while she was visiting one of Sonny’s coffee warehouses.

At the very same time, Cyrus’s henchmen shot at Michael and Sasha Gilmore (Sofia Mattsson) along with Josslyn Jacks (Eden McCoy) and Laura Spencer (Genie Francis), while at the Port Charles pier. Horrifically, Laura nearly died after being shot in the stomach! The same could have happened to any member of the Corinthos family.

The conflict between Cyrus Renault and Sonny Corinthos (Maurice Benard) is hardly over. No one knows how long it could last. More importantly, Sonny doesn’t seem to be taking much action to put a stop to Cyrus’s efforts to move in on his territory. Why that maybe is anyone’s guess at this point. However, the fact remains that the Corinthos family and by extension the Quartermaines have to live with twenty-four-hour security. Guards are placed all around their homes. Does Nelle have this issue?

The likelihood of this happening is slim though considering the fact that Michael is a relatively moral person. While he might be ruthless in business, he hardly seems the murderous type. That’s true even when it comes to keeping Wiley safe. The truth is, if Cyrus Renault continues his activities against the Corinthos family, Michael could actually get to the point where he feels blocked in with his back against the wall. If his personal options for keeping Wiley safe are limited to picking up and moving out of Port Charles, one has to ask whether he is willing to do that.

GH Spoilers – What Will Micheal Corinthos Do

Would Michael be willing to leave his entire life behind in order to keep Wiley safe? Maybe. Then again, he might see that while Nelle is certainly a horrible person, Wiley could be completely off Cyrus Renault’s radar if Nelle is allowed custody.

It’s also possible that if Nelle is encouraged to allow her motherly instincts (if she has any) to grow, custody of Wiley might actually be good for her mental health.

This is probably the least likely scenario to occur, but if Michael runs out of options, viewers just might see the unthinkable happen!

The Young and the Restless: Billy and Lily Forced To Work Together – Disastrous Results Ahead?