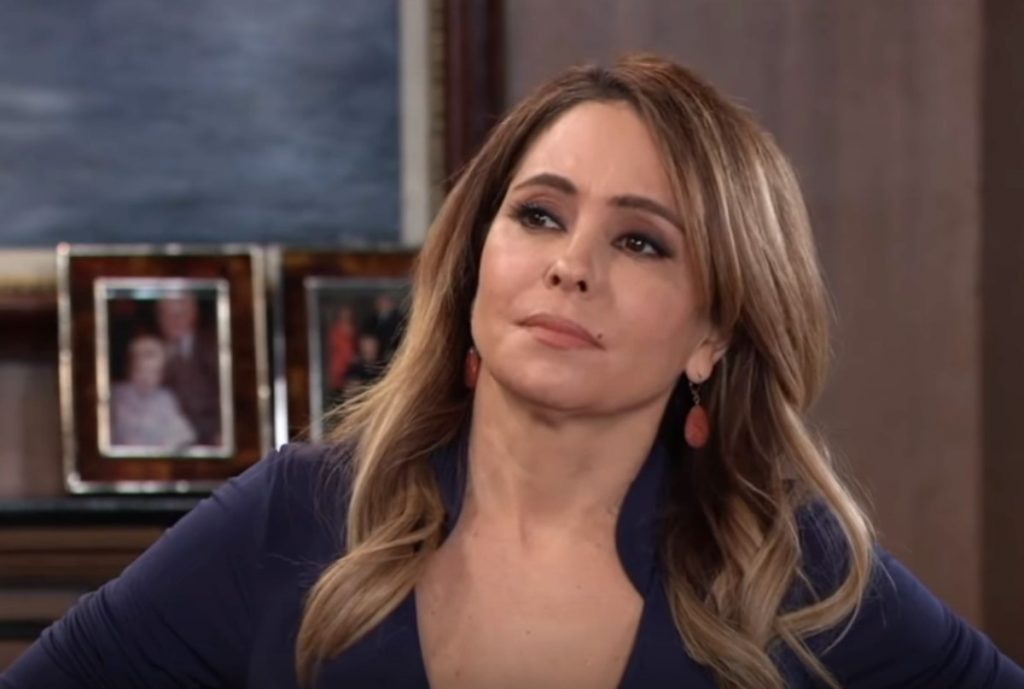 Olivia Quartermaine (Lisa LoCicero) has a question for Brook Lynn Quartermaine (Amanda Setton). She wants to know if there is an actual offer on the table. General Hospital viewers will recall that in Monday’s episode, after being threatened by Julian Jerome (William DeVry) down on the docks, which was interrupted by Valentin Cassadine (James Patrick Stuart) Linc Brown (Dan Buran) did give Brook an offer for her ELQ stock, which would let her out of her contract with him. It sounds like Brook Lynn may be talking to Olivia about that offer!

General Hospital viewers will also recall from Monday’s episode that Police Commissioner Jordan Ashford (Briana Nicole Henry) told her husband, Curtis Ashford (Donnell Turner) that she was going to disappear and resign, and now she is telling him she’s turning herself in! Could she have done something illegal all those years ago when she, Marcus Taggert,(Réal Andrews) Bob Massicotte (Randy J. Goodwin) and Mark Simon (uncredited actor) took down Cyrus Renault (Jeff Kober)? Cyrus claims he was set up and framed – but exonerating him and turning him loose on the public will only make things worse!

At the Quartermaine mansion, Detective Harrison Chase (Josh Swickard) warns Sasha Gilmore (Sofia Mattson) that Michael Corinthos (Chad Duell) is messing with Willow Tait’s (Katelyn MacMullen) head and that he needs to stop! Michael, of course is not intending to mess with Willow’s head but he had been intending to have Willow still be as much a part of Wiley Corinthos’ (Erik and Theodore Olson) life as she always has been, but she can’t handle it. She told him it is not healthy for her and she needs to break the attachment to Wiley for her own good!

Meanwhile, Willow is thinking about something – and says to someone that the more she thinks about it the more she wants to! General Hospital viewers will recall a few months ago when Willow thought she was pregnant she was worried about what Chase would think and if he would want children, and now that she knows that he would, is she thinking about having another baby? Of course, one baby does not replace its sibling if the sibling has died, but it might help somewhat to heal the hole in her heart that finding out her real baby died, or at least get her attention focused on someone else that would be her baby.

In the Port Charles courtroom, Nelle Benson Archer (Chloe Lanier) is ready to be arraigned on her new charges. Carly Corinthos (Laura Wright) enters the courtroom, and Nelle must have just said a prayer or possibly an oath ending with “so help me God” because Carly snarks at her, saying if she were here she’d try not to attract God’s attention! Carly would have to admit to herself, however, a well-placed bolt from the blue might solve a problem or two!

Elsewhere, Sonny Corinthos (Maurice Benard) talks to Curtis Ashford as Jason Morgan (Steve Burton) looks on. He tells Curtis that Cyrus is a problem, and they need to find a solution! Now that Marcus Taggert is out of the picture, instead of teaming up with him to solve the problem of Cyrus, it looks like Curtis, Jason, and Sonny are teaming up instead!

The Bold and the Beautiful Spoilers Wednesday, March 4: Steffy Overhears A Troubling Conversation – Hope Goes To Liam After A Conflict With Thomas