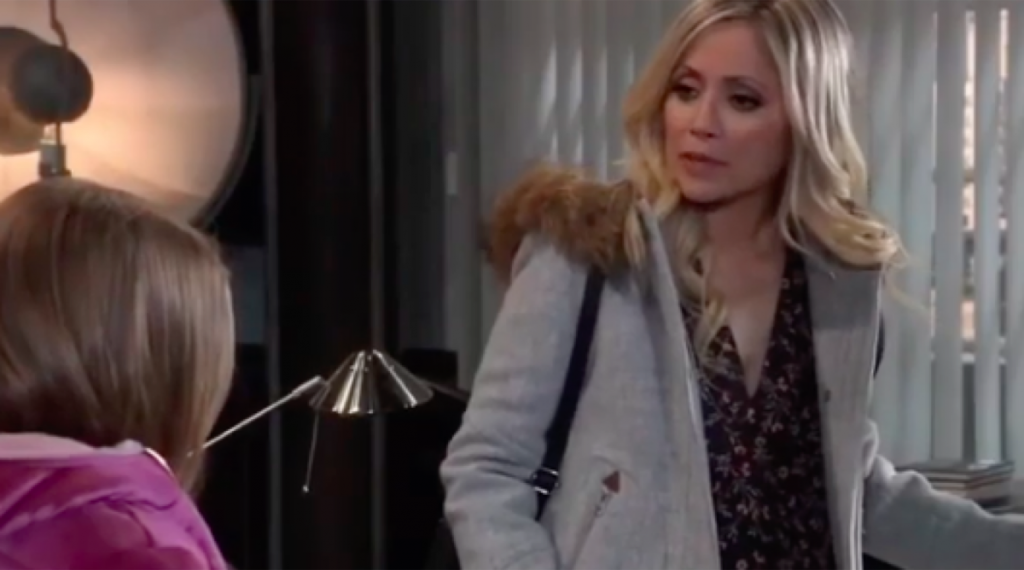 At the offices of Crimson Magazine, Lulu Spencer (Emme Rylan) arrives to pick up Charlotte Cassadine (Scarlett Fernandez) from her afternoon with Nina Reeves (Cynthia Watros). She notices there is a picture of Sasha Gilmore (Sofia Mattsson) on Nina’s desk cut to shreds – it’s a mockup of a Deception ll article about Sasha.

Lulu asks her daughter what happened there? Did she cut it up like that? Charlotte gives an unbelievable answer – or shall we say an answer that shouldn’t be believed?!

GH Spoilers – Nikolas Cassadine Agrees But With A Condition

Nikolas Cassadine (Marcus Coloma) on the plane with his new bride Ava Jerome Cassadine (Maura West) on the way home from France, where he didn’t have such a good reunion with his son Spencer Cassadine (Nicolas J. Bechtel) who is angry and not speaking to him, discusses the prenup that Ava wants him to sign. He says he will sign it but only if she agrees to a condition he wants!

Josslyn Jacks (Eden McCoy) has an idea she discusses with older brother Michael Corinthos (Chad Duell). She tells him if Lucas Jones (Ryan Carnes) never wakes up, that it would be Brad Cooper (Parry Shen) raising Wiley Cooper-Jones (Erik and Theodore Olson) by himself, and if he has let Nelle Benson Archer (Chloe Lanier) move in with him now and play with the baby, the only good solution would be for Willow Tait (Katelyn MacMullen) to revoke the adoption and take Wiley back! That might work but they’d probably have to prove Brad an unfit parent – which actually, may not be that difficult!

At the Metro Court, Sasha and Willow talk about Wiley and the situation with Brad and Nelle living together and Brad taking care of Wiley; Willow is very uncomfortable with the whole situation, and she asks Sasha, how can she be okay with Brad raising her son on her own? He is an absolute woman whipped by Nelle! Of course, Willow doesn’t know that Wiley isn’t really her son and that Nelle is blackmailing Brad about that fact!

General Hospital Spoilers: Spencer And Nikolas Reunite- Will It Be Positive? https://t.co/hOG53ZCESF pic.twitter.com/G2hGFLRksx

At the Metro Court, speaking of the devil, she has arrived wearing a pretty flowered dress that doesn’t portray her true self at all and starts taunting Carly Corinthos (Laura Wright)! Apparently she is talking a lot about Jonah Corinthos, the grandson Carly thinks died. She dares her to mention Jonah one more time and see what happens – she will probably call Metro Court security to have her removed, but she might try to have her arrested based on parole violations! She probably knows the felons in the room and will have no problem introducing Nelle to them before calling the police!

At what appears to be a restaurant, Sonny Corinthos (Maurice Benard) and Jason Morgan (Steve Burton) discuss a plan. Sonny tells Jason that there can be no “incidents” and this has to work! This may be a plan to fight whoever left the calling card by hijacking the Corinthos coffee truck and then burning it! But, will their plan work? They don’t even know who it is yet!