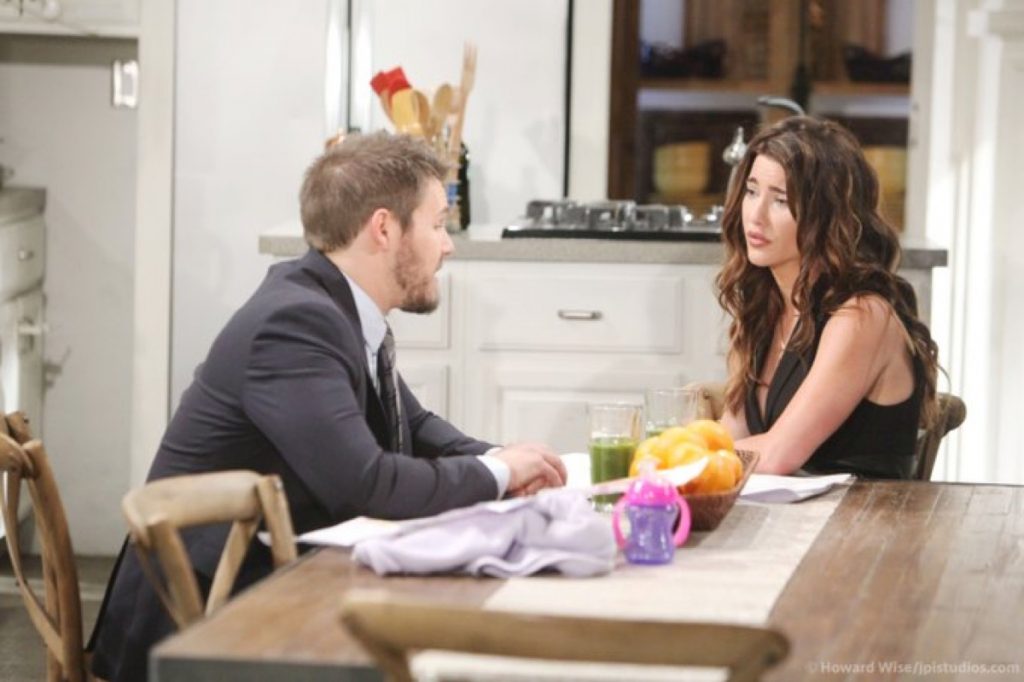 The Bold and the Beautiful spoilers for Wednesday, January 22, tease that the action is really heating up on the CBS soap. But before we get to that, we have a programming note. As you probably know, Tuesday’s episode of B&B was nationally pre-empted, so right now the plan is for CBS to push Tuesday’s episode to Wednesday.

Of course, the impeachment hearings could cause even more pre-emptions, but we’ve got the scoop on what viewers can expect on the next episode of B&B, which is currently scheduled to air on Wednesday, January 22nd. If that changes, we’ll keep you informed.

First off, Wyatt Spencer (Darin Brooks) will go to see his mother Quinn Forrester (Rena Sofer). It looks like he’ll want to update her on what’s been going on in his personal life. As B&B viewers know, Quinn has been after Wyatt to break up with Sally Spectra (Courtney Hope) and get back together with Flo Fulton (Katrina Bowden) for a while now.

Quinn will probably be ecstatic to hear that Wyatt had the “breakup conversation” with Sally, but Wyatt will also tell his mom that Sally refused to end their relationship. Perhaps Quinn will offer her son some advice as Wyatt frets about what to do. After all, what does one do when someone refuses to break up with you?

Meanwhile, Sally will head to Flo’s apartment to set the record straight about Wyatt. Of course, Sally will probably still be reeling from Wyatt’s attempted break up with her, and she’ll want Flo to know that she’s not just going to walk away from Wyatt this time. But it looks like Flo will question why Sally wants to be with someone who doesn’t want her. That’s a good question, and it may give Sally food for thought.

But something else will happen during Sally and Flo’s confrontation. According to the Bold and the Beautiful spoilers, Sally will have more terrifying physical symptoms. As B&B viewers know, Sally’s hands trembled uncontrollably recently while she was at Forrester Creations, and it was enough to make Steffy Forrester (Jacqueline MacInnes Wood) and Ridge Forrester (Thorsten Kaye) seriously worry about her.

Well, it appears that sally will have more of these symptoms while she’s with Flo, and B&B spoilers say that Flo will really worry about her. This could be what finally prompts Sally to see a doctor and find out what’s causing her shaking.

Next, Hope Logan (Annika Noelle) will turn to an unlikely person for comfort…Thomas Forrester (Matthew Atkinson). As B&B viewers will remember, Hope recently broke up with Liam Spencer (Scott Clifton) after seeing him kissing Steffy. And of course, that kiss was orchestrated by none other than Thomas himself, with a bit of an assist from Steffy, who kissed Liam right on cue.

Well, it looks like Hope will still be feeling pretty raw about the breakup, and she’ll open up to Thomas and vent about the kiss. Thomas will comfort Hope and be someone she can talk to and lean on – just as he planned all along. It will be a big win for Thomas, as his plan to manipulate Hope works out just as he wanted.

Finally, Liam and Steffy will spend some family time at the beach with their daughter Kelly Spencer (Zoe Pennington). They’ll have a great time together, but as the day progresses, it looks like the topic of their kiss will come up. Liam will let Steffy know that he doesn’t blame her for what happened with Hope seeing the kiss and blowing up afterward, but Steffy will think that he should blame her.

In fact, it seems that Steffy will be feeing quite guilty about going along with Thomas’ scheme and she’ll determine that she needs to tell Liam the truth about how the kiss really came about. But whether she ever really tells Liam the truth remains to be seen, as ongoing B&B spoilers say that Thomas will eventually pressure Steffy to keep quiet.