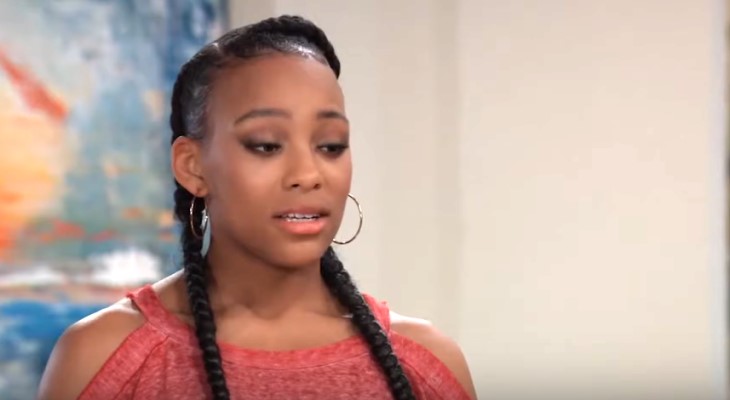 General Hospital (GH) spoilers tease that Trina Robinson’s (Sydney Mikayla) life continues to fall apart as unsettling news about her father, Marcus Taggers (Real Andrews) comes to light. As viewers know, Taggert helped put Cyrus Renault (Jeff Kober) away all those years ago by helping to fabricate evidence against Renault. Renault was guilty, but finding evidence against his proved impossible, so Taggert, along with three other agents, made the conviction happen to save lives and get Renault off the streets.

But in order to get Renault released and save her kidnapped son TJ Ashford (Tajh Bellow), Jordan Ashford (who was one of the three other DEA agents) is turning Taggert and the others in to get Renault released and TJ freed. At that point, Sonny Corinthos (Maurice Bernard) and Jason Morgan (Steve Burton) are to “take care” of Renault. But whether any of that happens or not, how will this impact Trina? She won’t believe for a minute that her father could do something illegal, and once the truth set in, Trina will likely take it very hard.

Trina adored Taggert. His recent murder has thrown Trina into a tailspin. Once she finds out that Taggert was dirty and it gets out, Trina will likely spin way out of control. With the new wave of drugs in Port Charles, is seems very possible that Trina will turn to the very drugs that her father tried so hard to keep out of Port Charles. Trina will just want to forget all of this, and Cyrus’ drugs may provide an easy way to forget, at least temporarily.

General Hospital Spoilers – Trina Has A Lot Of Support

But Trina has a lot of support. Her friends Cameron Webber (William Lipton) and Josslyn Jacks (Eden McCoy) would surely notice if Trina’s behavior suddenly changed. Ava Jerome (Maura West), Trina’s boss at the art gallery would also likely notice almost immediately if something were going on. Let’s hope that if Trina does go down that path, that the people in her life will immediately step up and get Trina whatever help she needs!

GH Spoilers – What Will Happen?

Will Trina spin out of control after the news about Taggert comes out? Will she turn to drugs? Can her family and friends help her? Only time will tell, so stay tuned to General Hospital airing weekdays on ABC. And don’t forget to check back here regularly for all your General Hospital news, information, and spoilers!

What Is Prince William Thinking – Is Mental Health More Concerning Than Death?