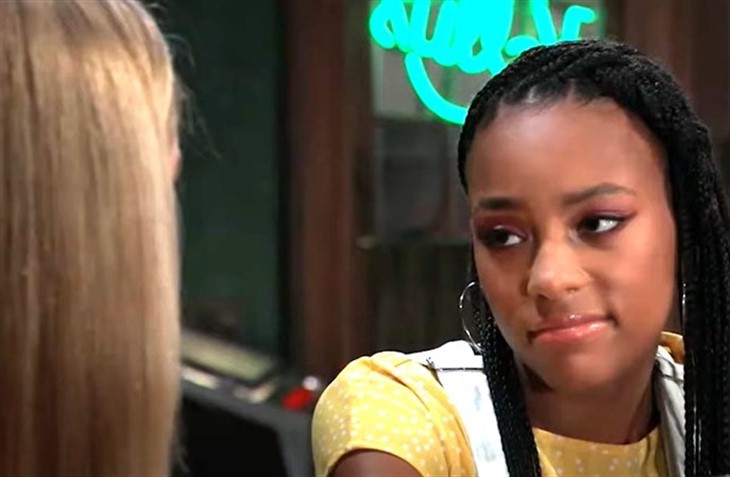 General Hospital (GH) spoilers indicate that Cyrus Renault (Jeff Kober) will continue to use whoever he needs to get what he wants, including the teens! Since Julian Jerome (William DeVry) let it slip to Cyrus that Marcus Taggert (Real Andrews) had faked his death, Julian has come up with a plan.

After having one of his men tell Trina Robinson (Sydney Mikayla) that he had information on Taggert, Cyrus himself met with Trina and gave her the news that Taggert had faked his death knowing the teen would search for her father so that Cyrus could kill him.

Although Trina has absolutely no reason to trust Cyrus, she correctly believes that he is telling her the truth about her father. To that end, Trina has enlisted her best friend, Josslyn Jacks (Eden McCoy) to help her in her quest to discover the truth. Josslyn, for her part, has already warned Trina about the danger of trusting Renault. But Trina is determined and Josslyn has agreed to help Trina. There are a couple of places that Trina may begin the search, the most likely being General Hospital itself!

The most likely place that Trina and Joss will begin their search is at the hospital where Taggert supposedly died. As viewers know, Epiphany Johnson (Sonja Eddy) helped Taggert fake his death, along with Jordan Ashford (Brianna Nicole Henry). Though Epiphany is likely to shut down any kind of questioning, she may decide to contact Taggert to let him know what his daughter is up to. If Epiphany and Taggert agree to meet face to face, Trina may decide to follow Epiphany with Cyrus not far behind.

If Epiphany meets with Taggert, and the teens follow her it could be the site of a bloodbath if Cyrus decides to take Taggert out right there and then. Cyrus won’t care if Epiphany or even Trina or Joss are there, he wants his revenge on Taggert and any one of them, or all of them, could be seriously hurt or even killed once Cyrus gets confirmation that Taggert is still alive!

Will Epiphany lead Trina and Josslyn to locate Taggert? Will Cyrus crash any potential reunion with his own deadly plans? Exciting times are coming to Port Charles, so stay tuned to General Hospital, airing weekdays on ABC. And don’t forget to check back right here for all your General Hospital news, information and spoilers!