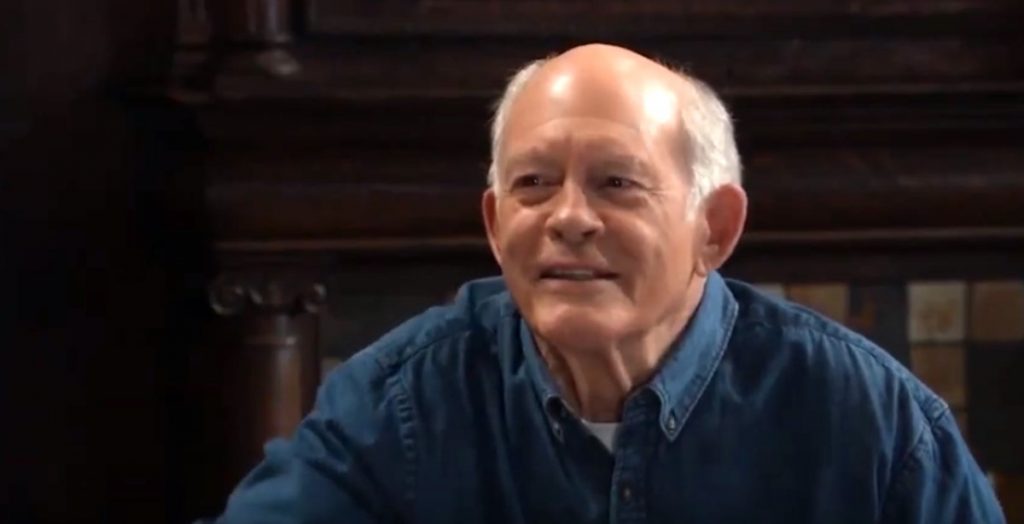 General Hospital spoilers tease that Sonny Corinthos (Maurice Benard) will worry about his father, Mike Corbin (Max Gail) and the effect that the attack on them at the restaurant in Brooklyn, NY had on him in an upcoming episode of GH!

Mike Corbin (Max Gail) was terrified when the attack happened, there were gunshots everywhere, between Jason Morgan (Steve Burton) and the gunman, who he finally killed, but only after he had taken the waitress hostage and threatened her life! She was brave enough to elbow the gunman in the ribs and duck, giving Jason the opportunity to shoot him dead and save her life, as well as Sonny’s and Mike’s.

But Sonny remembers Mike having a meltdown and thinking he was a little boy in trouble with his mother, and wanting to go home! It was at that point that Sonny had to accept that it may be too late for the experimental Alzheimer’s treatments he took Mike to Brooklyn for, to begin with, may not work on him, and when they called, he canceled and took Mike home. But the fear of the situation had to affect him – and he vents to Jason in frustration about how they were completely exposed!

GH Spoilers – Will This Experience Make Mike Corbin Even Worse?

Sonny recalls that even though this restaurant was a place that Mike practically lived at when he was younger and they were in Bensonhurst, and it hadn’t changed that much, Mike hadn’t remembered it. He was comfortable there, like he was familiar with it somehow subconsciously, and he seemed like his old self when he started flirting with the waitress, and she was very good with him, like she had experience with Alzheimers’ patients herself, although she never said she did.

But once he got his father back home, Mike seems to be withdrawn and quiet. Sonny worries that his efforts to help his father only made him worse! He didn’t seem to recognize where he was or who he was when he brought him back to his room at Turning Woods. He just kind of shut down!

Sonny also worries if his father will be safe at Turning Woods – after all, it looked like the gunman in Brooklyn was targeting both him AND his father! Sonny knows that a mob war is starting in Port Charles and that Cyrus Renault (Jeff Kober) is not going to back down – he wants to run his drugs through Sonny’s territory and Sonny wasn’t buying what Cyrus was trying to sell him.

He worries that with all of Cyrus’ apparent eyes and ears in Port Charles, and the evidence that his contacts even knew about the trip to Brooklyn and right where they would be, would the next attack be on Mike at Turning Woods?! Sonny is worried – very, very, worried – and it takes a lot to worry Sonny!

The Young and the Restless Spoilers: Kyle and Lola’s Break Up Leads To Plot Twist