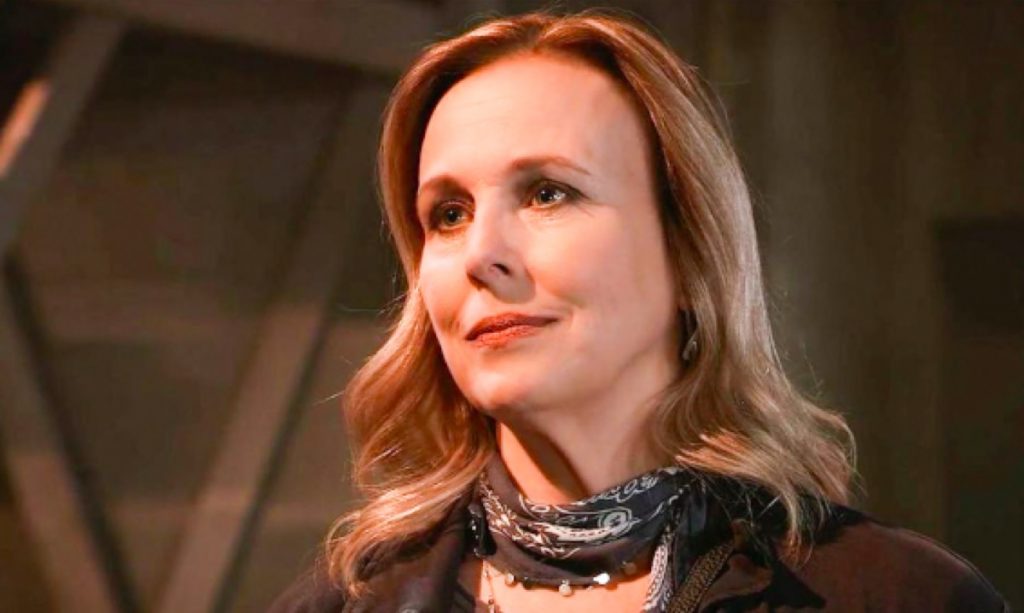 General Hospital spoilers & rumors tease that a shocking hookup could be on the horizon on the ABC soap, a marriage of good and evil, law and disorder, if you will. Is Laura Collins (Genie Fancies) desperate enough to bring down Cyrus Renault (Jeff Kober) that she’d sleep with him?

Let’s face it, as the mayor she’s awfully desperate! Crafty Laura may in fact be hatching a devious plan to bring Cyrus to justice, but it could also be a dangerous ploy that lands her in hot water on General Hospital.  Will she try to bed Cyrus and get a confession out of him, risking her marriage and all that she holds dear?  She’s got a history of playing fast and loose as one part of infamous super couple Luke and Laura, so anything is possible!

Laura definitely has a thing for bad boys as her relationship with Luke Spencer (Anthony Geary) shows. She’s the mayor now which is quite a turnaround for her, but old habits die hard.

She’s been in altercations with Cyrus a few times now, and each time she’s looked like a dear in the headlights. Is that fear or lust she’s feeling?

General Hospital Spoilers Updates: Tension Grows Between Sam And Brando – Will They Hit The Sheets?https://t.co/CiZELacf2s

General Hospital spoilers – Where has Kevin Collins been?

And just where has her husband Kevin Collins (Jon Lindstrom) been? These two were once inseparable but now we, and Laura presumably, hardly ever see him. Is this anyway to keep the home fires burning?

As mayor, Laura has made it clear she is willing to go to great lengths to protect Port Charles from Cyrus. How far? Don’t put it past Laura to concoct a harebrained scheme, the kind of which she participated in on a regular basis with Luke, in order to get what she wants.

In fact, Cyrus is a lot like Luke. He is bold and brazen, holds himself outside the law, and has a sinister charm that is seriously hot.

It’s not out of the question that Laura could try to appeal to Cyrus’ manly side. During their last meeting he told her it’s been a long time since he was in the company of women—was that a hint that something hot is about to erupt between these two? Be sure to tune in to General Hospital spoilers and find out GH fans!