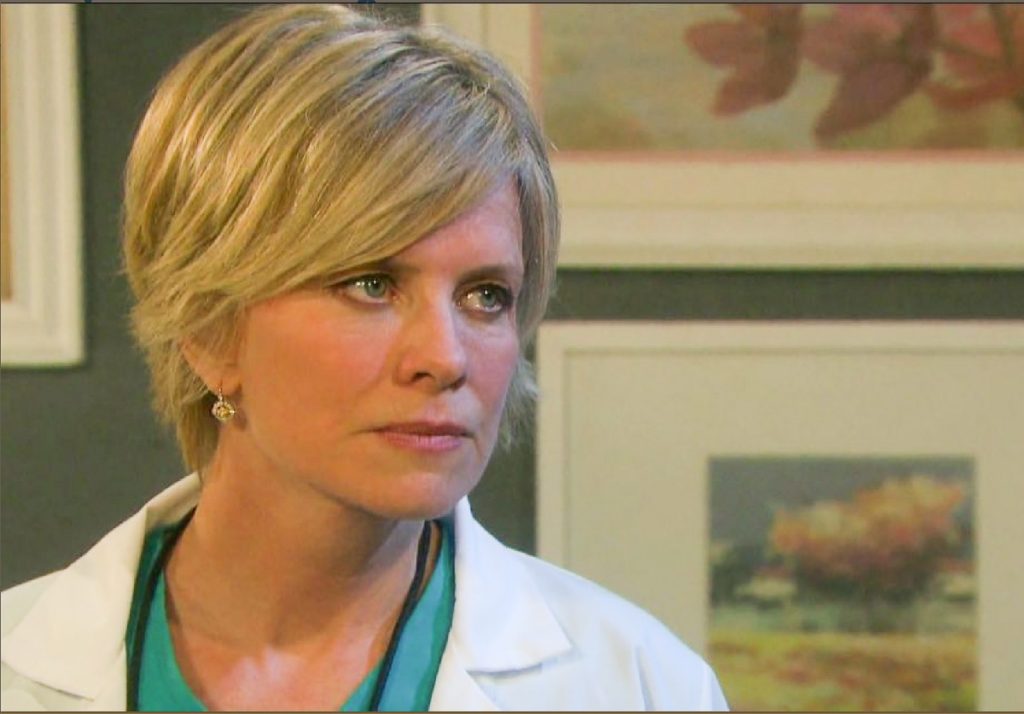 Days of Our Lives spoilers next two weeks reveal  Dr. Kayla Brady (Mary Beth Evans) will share shocking news. She tells Justin Kiriakis (Wally Kurth) and Sonny Kiriakis (Freddie Smith) something that affects them both. Could it be about Adrienne Kiriakis (Judi Evans) not really dying in the Mother’s Day crash on the NBC soap? Could she somehow still be alive?

DOOL 2020 spoilers reveal that Kayla has shocking news. It is unlikely that it is about her romantic relationship because of the people involved. While there is no confirmation on what exactly this news is, we do know it directly impacts two specific Salemites.

According to Days of Our Lives Past, Present, and Future, Justin and Sonny are affected by the news. Because of Sonny’s name being mentioned, we don’t think it has anything to do with Steve “Patch” Johnson (Stephen Nichols).

Days of Our Lives spoilers reveal that in the next few weeks, we will finally get answers about the Mother’s Day crash. It is a lot more complicated then we’ve been led to believe. There has been speculation for a long time that Adrienne might still be alive.

It could have been Bonnie Lockhart (Judi Evans) in that car, not Adrienne. If that is true, then what was Bonnie doing there and why did everyone think she was Adrienne?

Days of Our Lives Comings & Goings: Is Adrienne Kiriakis Alive?

Fans heard months ago that Judi Evans would be back on the NBC soap opera. However, she portrayed two characters: Adrienne and Bonnie. So, she must be coming back as one of them. Viewers would prefer Adrienne to be alive instead of the actress reprising the role of Bonnie.

If the NBC Days car crash theory is on target, then was a big switcheroo done before the crash? If so, then what was Bonnie’s reasoning and where has the real Adrienne been all this time? Plus, there are other questions about the storyline. Who drugged Maggie Horton Kiriakis (Suzanne Rogers) and put her body behind the wheel? What was the whole reason for the devastating accident?

What do you think the real story is about the car crash? What shocking news will Kayla deliver to Justin and Sonny on Days of Our Lives? How will this affect the characters moving forward? We will have to keep watching to find out.