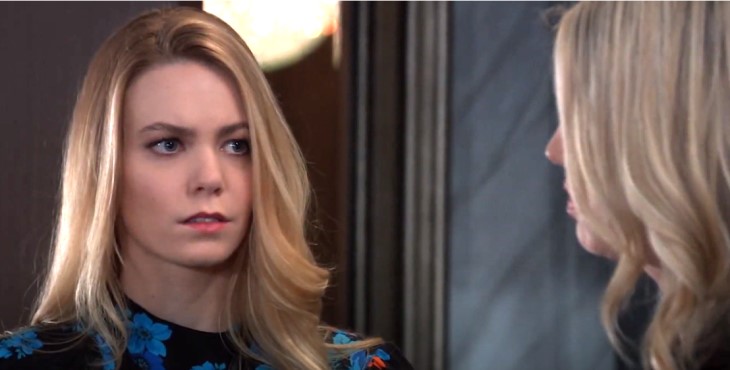 General Hospital (GH) spoilers tease that Nina Reeves (Cynthia Watros) has only wanted one thing since she found out she had a long-lost daughter. She wants to find the young woman, assuming she’s alive, and be the best mother she can.

There isn’t anything Nina wouldn’t do for the young woman, as she demonstrated when she believed her child was Sasha Gilmore (Sofia Mattsson). As viewers know, Nelle Benson (Chloe Lanier) possesses the other half of the heart-shaped pendant that Nina believes is in the possession of her child. That means, barring yet another twist, that Nelle is most likely Nina’s little girl.

General Hospital Spoilers – Does Nelle Benson Have Any Idea?

Nelle doesn’t seem to have any idea she was adopted. She thinks she belongs to Frank Benson (James Patrick Stuart) and sees Carly Corinthos (Laura Wright) as the adopted sister who abandoned her. If she had any idea that Nina gave her up, she would have come to town to get revenge on Nina, as well as Carly. It will likely be a huge shock to Nelle, but how will she be happy to finally find a real familial connection?

Nelle more than likely knows that Nina didn’t even know she was pregnant, and that she was in a coma when she gave allegedly gave birth to a healthy baby girl. She would never have given her child up if she had any power over the situation. But her own mother, Madeline Reeves (Donna Mills) either gave the baby away or sold it on the black market. Nina still doesn’t even know for sure if she actually did give birth or if she miscarried. Sadly, Nina’s coma lasted twenty years, so she wouldn’t have been able to be a mother to Nelle either way. Nelle should completely understand because her own childhood was difficult at best.

Nelle had a really difficult childhood. Needing money, Frank actually sold Nelle’s kidney in order to make money. Jasper “Jax” Jacks (Ingo Rademacher) purchased the kidney for Josslyn Jacks (Eden McCoy), who desperately needed a transplant. The kidney removal was a very painful process for Nelle, and that’s the kind of pain that Nelle associates with her childhood. They were poor and moved from place to place.

Nelle will be devastated if she finds out Nina is her mother after Nina has testified against her at Wiley Corinthos’ (Erik and Theo Olsen) custody hearing. Nina gave Nelle a job at Crimson, but only to spy on her and find information to help Michael Corinthos (Chad Duell) win sole custody. More than likely, the mother-daughter relationship won’t be discovered until then at the very least. But once Nelle gets over the betrayal, would she have any interest in forming a real relationship with Nina? If Nelle has anything left of her heart, she won’t play with Nina’s emotions like that. But it seems likely that Nelle will continue to look out for Nelle, and Nina will just be the means of getting what she wants. Plus, Nina will likely feel so awful if she does testify against Nelle that she will likely try to make it up to her any way she can, which will most likely be financial.

Will Nelle pretend to care about Nina, and break her mother’s heart once again? Or could they actually become a real mother and daughter, with all the love that comes with it? Only time will tell, so stay tuned to General Hospital airing weekdays on ABC. And don’t forget to check back here regularly for all your General Hospital news, information, and spoilers!