General Hospital Spoilers: Peter Continues To Manipulate Maxie, Ready to Do What It Takes To Keep Her In The Dark 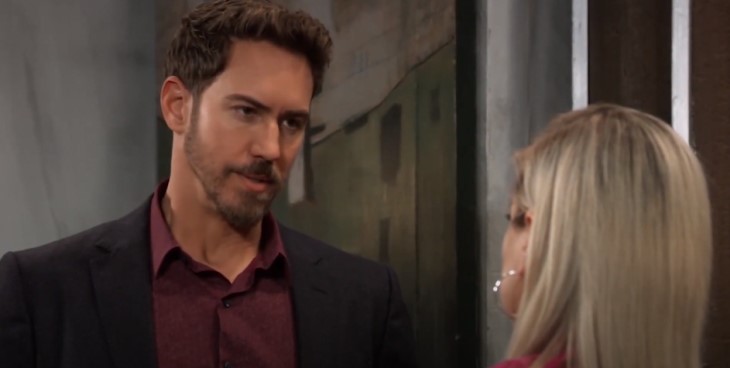 In General Hospital’s previews, Peter talks to his mother, Anna Devane (Finola Hughes) and tells her that he will do anything to keep what he has; meaning Maxie and her son James West (Owen and Curtis Rufca), who he thinks of as his own. Technically, he is his half-uncle by blood, since the late Detective Nathan West (Ryan Paevey) and he shared a father, Cesar Faison (Anders Hove). But Peter actually was the one who delivered James, with Maxie giving directions when she went into sudden labor and were out in the country and couldn’t get to General Hospital in time.

Peter was very awkward not only with being a midwife but awkward with Maxie, period, not having ever been involved with any women before in his life – Maxie is his first girlfriend and it took literally years for them to get to the point where they are now! He loves her – yet, because of his past has come back to haunt him and his not have been fully truthful about his past crimes, now he has to continue to cover them up and more recent ones as well, which he committed all in an effort to keep his past crimes hidden!

If all of that comes out, he fears he will lose Maxie and the little family he has built over the past years, and maybe even his relationship with his mother! Peter was shunted off to a Catholic school at an early age, and mainly raised by nuns – although he obviously became closer to his father, who he hated, as he became older, as evidenced by his working for him and Helena Cassadine (Constance Towers) and Valentin Cassadine (James Patrick Stuart) also looked out for him over the years, although they two seem to have had a sort of falling out recently. Even Valentin doesn’t know about his part in the crimes he has framed Liesl Obrecht (Kathleen Gati) for!

Maxie is all in now and doesn’t believe the opinions of those such as District Attorney Robert Scorpio, (Tristan Rogers) who even though he had to do what the law required in having Liesl arrested, and extradited to The Hague and the World Court to stand trial since much of the charges were considered international crimes. Robert is actually Maxie’s step-uncle since Mac Scorpio (John J. York) is married to her mother, Felicia Scorpio (Kristina Wagner).

Longtime General Hospital viewers will recall that Maxie, her late sister Georgie Jones (Lindze Letherman) and her cousin Robin Scorpio-Drake (Kimberly McCullough) were raised together as sisters, and so that is saying a lot when she won’t believe Robert about Peter. However, she has also been shocked that her mother-in-law Liesl, who she had become very close with, would have committed the crimes she has been accused of, although looking at her past, Maxie felt very betrayed!

Perhaps it is something that Liesl said to Maxie when Maxie went to the Port Charles Police Department jail to tell her goodbye that has caused her to have her doubts about Liesl’s guilt – Robert certainly has his, although he had to uphold the law regarding Liesl because of the “evidence” Peter had a contact at Lumina manufacture against Liesl, probably someone in the human resources department who had access to the human resources files.

General Hospital Spoilers: Brando Decides That He Doesn’t Want To Give Up On Molly? How Far Will He Go? https://t.co/fe4DK6Dgfl pic.twitter.com/gFn5ivFpCT

Perhaps when the case is tried overseas in the World Court in The Hague their investigators will be able to prove the files were altered – Robert, being in the United States, is out of international jurisdiction and so his plan may be to have his WSB contacts do a deep dive into this evidence. If Maxie expresses her doubts and asks Peter why he is trying to shift the blame for her crimes to him and claim he framed her, of course, he is going to continue to manipulate Maxie so she will believe his narrative, not that of Liesl!

The Bold and The Beautiful Spoilers: Brooke Learns Ridge’s Location As Shauna & Ridge Head Out For A Wild Night – Ready To Drag Him Back