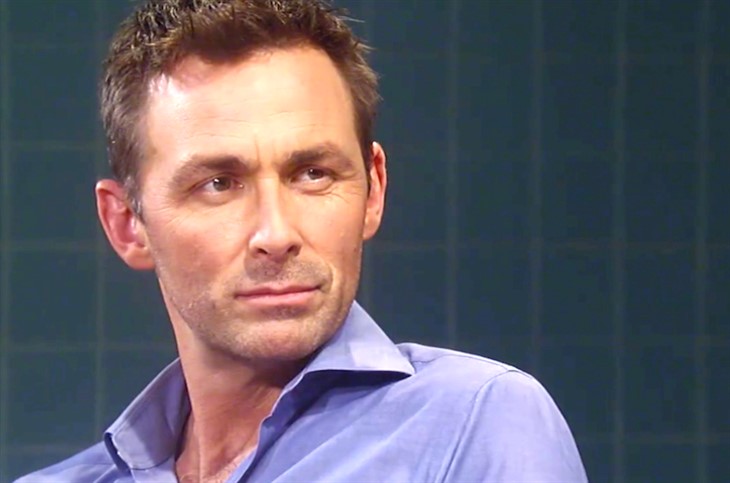 General Hospital (GH) spoilers tease that in Port Charles, NY Valentin Cassadine (James Patrick Stuart) currently has his hands full. Between running ELQ, helping Anna Devane (Finola Hughes) with Peter August (Wes Ramsey) and his own lingering feeling for Nina Reeves (Cynthia Reeves) Valentin has a lot going on. But he still had time to have a one night fling with Brook Lynn Quartermaine (Brianna Lane) and that may complicate Valentin’s life more than any of those other things combined!

Neither Brook Lynn nor Valentin regrets their night of passion. But they both agreed that it could never happen again. Valentin is in love with Nina even though Nina has moved on with Jasper “Jax” Jacks (Ingo Rademacher) and Brook Lynn is still recovering after having her throat slit by Nelle Benson (Chloe Lanier) at the Nurses Ball. Brook Lynn’s injuries may permanently end her dreams of a singing career. It’s obvious that neither of them needs to complicate each other’s life beyond that one night. But fate may have other plans.

Brook Lynn may have made amends with her father, Ned Quartermaine (Wally Kurth) but there is still tension because Brook Lynn sold her shares of ELQ to Valentin. And after everything that has happened, Brook Lynn has decided to leave town to sort everything out. But is that all there is to it? Before she left, Brook Lynn had a pregnancy test in her possession. Is she pregnant with Valentin’s child? Is that really why she left?

It’s fairly inevitable that Brook Lynn will be coming back to Port Charles sooner rather than later, once she has time to sort everything out. But if she is indeed pregnant with Valentin’s child, expect everything to change. Valentin loves being a father and would likely dote on Brook Lynn if indeed she is carrying his child. But would that change his feelings for Nina? Could Valentin finally be ready to move on, even as Nina may come to realize that she still wants Valentin?

Would Brook Lynn even want to be with Valentin Cassadine

But regardless of what Valentin wants, would Brook Lynn want the same thing? She has been getting chummy with Harrison Chase (Josh Swickard), even sleeping on his couch when Ned kicked her out of the Quartermaine mansion. She may want to raise Valentin’s baby on her own. Or she may not want to have the baby at all if there is any way at all that she can go back to her singing career. The entire situation is messy and there are no easy answers for anyone involved.