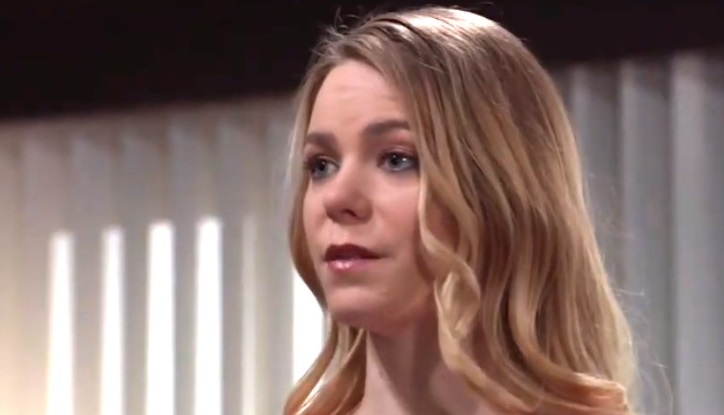 General Hospital Spoilers hint that Nelle Benson (Chloe Lanier) may reveal the other half of her necklace to Nina Reeves (Cynthia Watros) during the Custody Trial. It has been found that Nelle may have the other half of the necklace and could be Nina’s daughter. Nelle has the necklace with her, which was showed during the court case as she was messing with it. It could be that Nina will see her messing with the necklace and recognize it as being her daughter’s necklace. However, could this affect the court case?

Nelle is unpredictable, which means that she could believe that the necklace is something special for her and may not know that the necklace is the other half of Nina’s. Whether or not she is truly Nina’s daughter, she could think that she is as she was told plenty of lies as a child, including that Carly Corinthos (Laura Wright) was asked to be sisters with Nelle.

Related: General Hospital Spoilers: In What World Is Lucas NOT Part Of Wiley’s Custody Hearing?

On the other hand, it could be the case that Nelle could be setting up a trap for Nina and may have only brought the necklace to get Nina to help her with the court case by showing her that she is her daughter. Nina has resumed looking for her daughter, so it would not be much of a surprise.

While Filming Starts Around The World California Sits Idly By – When Will Hollywood Open? #gh #yr #dool #Boldandbeautifulhttps://t.co/WcwOmQXrU9

Nelle was married to David Henry Archer, and Willow Tait (Katelyn MacMullen) seemed to recognize the necklace when Nina was looking at it. If David Henry Archer really did have her necklace, then it would not be a surprise for Nelle to have it after he died. She has already gotten Nina to accept being a character witness, but Nina could decide to stick with her original plan of making Nelle look bad if this happens, Nelle may show off the necklace.

If Nina sees the necklace, it may push her back over to Nelle’s side, believing her to be her long lost daughter. What do you think? Do you think that Nelle is Nina’s daughter? Could Nelle be using this as a way to get Nina on her side? We’ll give you updates as GH news comes in. Stick with the ABC soap, and don’t forget to check Celebrating The Soaps often for the latest General Hospital spoilers, updates, and news.