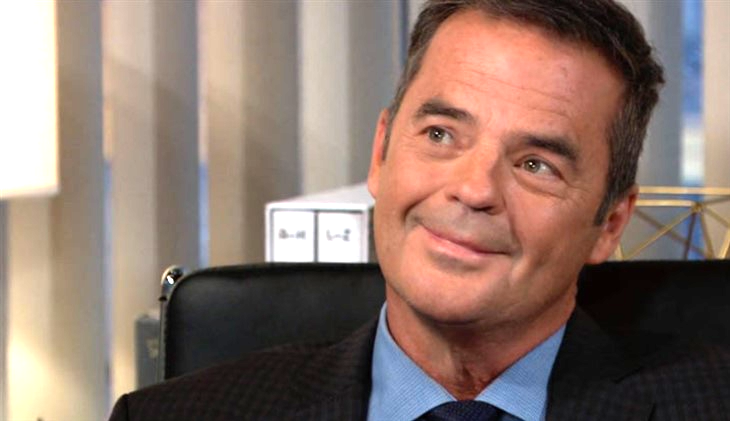 ABC General Hospital spoilers and updates reveal Ned Quartermaine (Wally Kurth) has put everything above his wife, Olivia Quartermaine (Lisa LoCiCero) the past several months. Olivia has begged Ned to give her the attention she needs. However, Ned has not come through for Olivia, will Ned change before it’s too late?

General Hospital’s Olivia has been distraught over her son’s disappearance for long before Sonny Corinthos (Maurice Benard) brought Dante Falconeri (Dominic Zamprogna) home. Dante spent very limited time with his family. Dante felt that he had to leave town to protect his family. Olivia was against her son leaving town but Dante insisted it was for the best. Olivia has tried to reach Dante for months but he refuses to communicate with her. Olivia has been beside herself with worry and Ned has been no help at all.

GH Spoilers – Ned Quartermaine Was Consumed With Taking Over ELQ

General Hospital’s Ned wasn’t content with working under younger cousin Michael Corinthos (Chad Duell). Ned felt he was much more qualified to run the family company. When Michael asked Ned to act as CEO while he took a temporary leave of absence, Ned decided to take over the position for good. Ned was so confident that he chose not to tell anyone about the takeover that he knew was under attempt.

Ned decided to handle this himself and chose not to contact the rest of the family. Because of Ned’s action, Valentin Cassadine (James Patrick Stuart) has now become the CEO of ELQ. Ned disowned his daughter because she sold her shares when he refused to save her from her manager. Ned blames everyone but himself for losing the company. Ned has turned into a carbon copy of his grandfather Edward Quartermaine (John Ingle)
Ned’s Demands Are Unreasonable

After General Hospital’s Brook Quartermaine (Briana Lane) was almost killed by Nelle Jerome (Chloe Lanier), Olivia got a chance to see her son. Ned chose to try to forbid Olivia to make this trip. Ned insisted that Olivia has to broker a truce between himself and his daughter. Olivia was having none of this. A chance to see her son after months of no contact was not going to go to waste. Olivia told Ned how selfish he was being and left with Robert Scorpio (Tristan Rogers).

Ned’s insufferable treatment of Olivia has pushed her into putting her life in danger by going on an adventure with Robert. Olivia has insisted on accompanying Robert to save his ex-wife, presumed dead Holly Sutton (Emma Samms). Has Ned pushed Olivia into a huge mistake or will he lose his wife to the super spy?

The Bold And The Beautiful Spoilers: Steffy Believes In Love Again – Sees Finn As Her Destiny