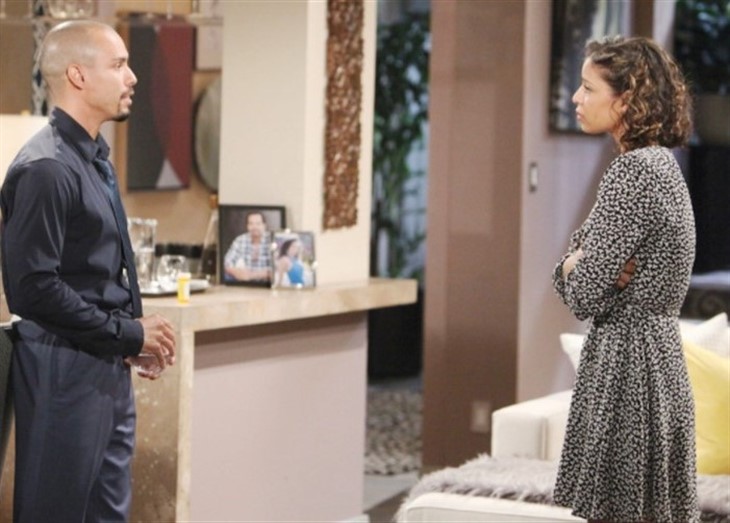 CBS The Young and the Restless spoilers tease that Devon Hamilton (Bryton James) will finally find out the truth about Elena Dawson (Brytni Sarpy) and Nate Hastings (Season Dominic) and needless to say, he’s not going to be very happy about it. Here’s what you need to know.

In Genoa City, Wisonsin, the moment of truth about what happened between Elena and Nate comes when Elena and Devon are in the Grand Phoenix suite getting ready for a gala in his honor. Unfortunately, Devon is only focused on Elena, and what she might be hiding from him. The Young and the Restless spoilers say that Genoa City will be presenting Devon with the Businessperson Of The Year award for his charitable contributions and his charity work, but unfortunately, his mind is elsewhere during this very important day. Devon wants to make it a fun day for Elena, seeing how stressed out she has been lately. While Devon is hoping that the two of them can relax, it looks like that certainly won’t happen.

During the award ceremony, Elena is chatting with Phyllis Summers (Michelle Stafford) when Nick Newman (Joshua Morrow) tells Devon that he saw Elena and Nate together the night that they worked on a teenager that had overdosed. Devon can’t believe that she never told him about this, but that’s not the only thing she’s been keeping from him. Little does he know that after an emotional outburst, Elena is going to confess that she slept with Nate.

Speaking to Soap Opera Digest in a new interview, Bryton James, who plays Devon Hamilton in the hit CBS soap, puts it this way, “She’s a wreck. He’s still thinking this is about Jared, but as she’s crying and talking, he hears a few keywords about losing control and then apologizing for doing this to Devon

A few beats before Elena actually confesses what happened with her and Nate, Devon is already feeling a punch in the gut. Now, it’s going to get messy and it will trip the table on a few relationships.”