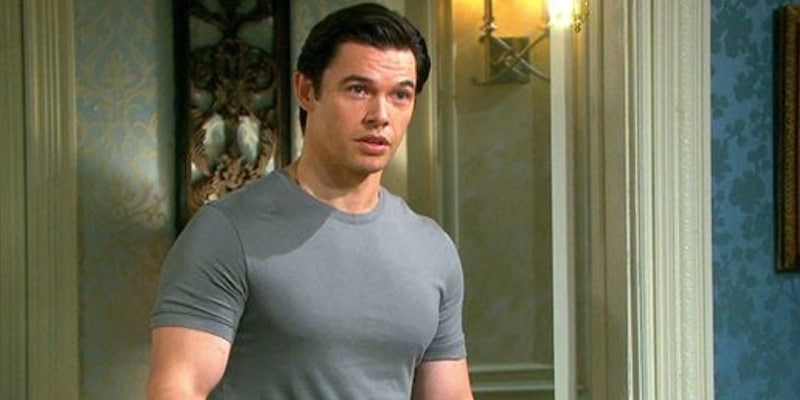 Days of Our Lives Spoilers – Xander Kiriakis Is Stunned

Xander Kiriakis (Paul Telfer) is stunned when he finds Eric Brady (Greg Vaughan) and Sarah Horton (Linsey Godfrey) in a compromising position; after finding out that Nicole Walker (Arianne Zucker) is now (supposedly) with Brady Black, (Eric Martsolf), Eric has turned to Sarah for comfort.

Xander finds them in a state of undress, assuming he interrupted a sex session between the two of them, and is not only stunned but heartbroken and blindsided because he is in love with Sarah and couldn’t believe she would do this to him! After the embarrassed couple dress and Eric leaves, Sarah assures a crestfallen Xander that she didn’t go through with it.

Elsewhere, Princess Gina Von Amberg aka “Hope Brady” (Kristian Alfonso) consoles John Black (Drake Hogestyn) over Marlena Evans’ (Deidre Hall) supposed “death.” As Days of Our Lives viewers will recall, Stefano DiMera aka “Steve Johnson” “rescued” Marlena from where Gina had her tied up, and in Friday’s episode consoled her over John’s death.

Telling her that Stefano had killed him! In reality, neither is dead and both are being told the other one is, with John believing Dr. Wilhelm Rolf (William Utay) had killed Steve as well! John is now “easy pickings” for Gina, and a photo still for this week shows that she gets her to wish where John is concerned!

After finding out Eric went to Sarah for comfort, Nicole comes clean to Eric and tells him the ruse of her and Brady being together was only meant to dissuade Kristen DiMera (Stacy Haiduk) away from her pursuit of Brady, but now Brady seems to be reconnecting with Kristen after all, over the loss of their child Rachel Isabella.

There appears to be no more need for the ruse, and although Nicole and Eric both doubt the wisdom of Brady’s reconnection with Kristen, since neither one trusts her, they decide at least for the time being, to stay out of Brady’s business and let him make his own mistakes – again!

Chad and Abigail DiMera (Billy Flynn, Kate Mansi) have many questions after discovering the portrait of “Steveano.” It is quite obvious that the portrait is meant to replace the original portrait of Stefano DiMera (Joseph Mascolo) because the pose, the suit, and the ring are all copies of the original except Steve Johnson appears to be impersonating Stefano as far as Chad is concerned. Days of Our Lives viewers will recall that Chad and Abigail made this unusual and shocking discovery in Friday’s episode and did not know exactly what to make of it, and are still puzzled!

Survivor Fans Troubled by Idols on the Show, Feel There Are Too Many – Will The Show Change?