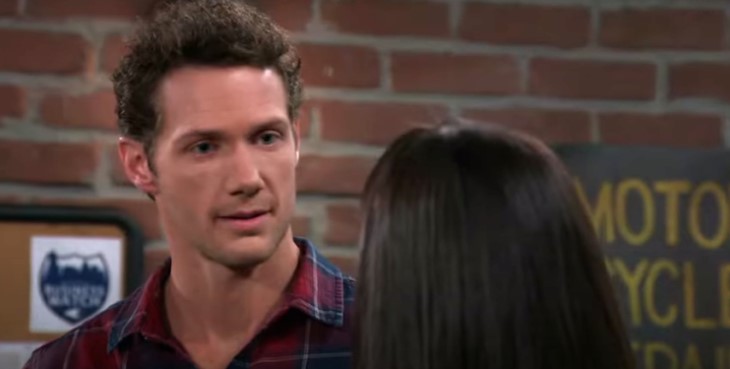 ABC General Hospital spoilers and updates suggest that Molly Lansing-Davis (Haley Pullos) could become angry with her sister, Sam McCall (Kelly Monaco) if the latter ends up sleeping with Brando Corbin (Johnny Wactor). GH fans know that while there hasn’t been any overly obvious move by either Brando or Sam to get together, there have been hints that things could get hot between these two in the near future.

What was it that Shakespeare wrote? “The lady doth protest too much, methinks.” The playwright might as well have put these words into the mouths of Molly’s sisters. That’s because GH viewers have seen Molly absolutely go nuts trying to convince everyone and their neighbor that she’s still in love with her boyfriend of eight years, TJ (Tajh Bellows). That’s even after Molly got down and did the nasty with Brando two seconds after she believed TJ had broken up with her. (Literally the same day.)

It’s no wonder then that so many rolled their eyes over Molly’s declarations of true love. Then too, GH fans watched as Molly headed back to Brando’s garage to ensure that he knew exactly where she stood. There was never going to be a “thing” between her and Brando. The slip and slide Brando had engaged in with her once upon a pleasant night would never happen again. In fact, Brando had to promise to pretend that it never happened at all! But then, Molly hesitated. Why?

Because Molly’s been ruminating on the night she shared with Brando and can’t forget it. She’s got Willie Nelson playing in the back of her mind, wishing that Brando’s sweet love didn’t have to die and that she ought to give him one more chance to keep her satisfied. Molly hesitated. She knew it. Brando knew it. GH fans knew it.

GH Spoilers – Brando Corbin And Sam McCall Are A Thing?

Of course, most GH viewers believe that Brando wishes that things really could have moved forward between him and Molly. There were several moments when fans saw him mooning over her after their night together. Still, what is, is. Right?

Brando seems to be a practical guy. He won’t likely wait around for Molly forever. That’s particularly true if he believes that she is going to pursue a “domestic partnership” with TJ.

That’s why, while it doesn’t seem super likely that Brando would become attracted to Sam after the way she totally berated him, seeds of an attraction may have been planted. Even though Sam treated Brando like he was a piece of you know what for even daring to sleep with Molly, the conflict and tension between the two could unlock something primal.

Many GH fans would agree that’s exactly where makeup shagging comes from. Brando and Sam might not like one another, they may scream and shout and maybe throw things, and guess what? All the increased blood flow, heart rate, and breathing mimic intense attraction (particularly when the people involved are already physically attractive).

In other words, Sam and Brando could get down and jiggy without even liking one another. That’s because it’s not about desire … at that point, it’s about need.

Quite frankly, if Brando sleeps with Sam it won’t be any of Molly’s business. She’s already let Brando know on which side of the bread his butter lies. Still, she’s likely to get super upset with Sam if her sister does indeed knock some boots with Port Charles’s newest mechanic.

It will be out of a misplaced sense of jealousy on Molly’s part if it happens. Because, even though she’s told Brando “no …” in her head, everybody knows she’s claimed him as her own.