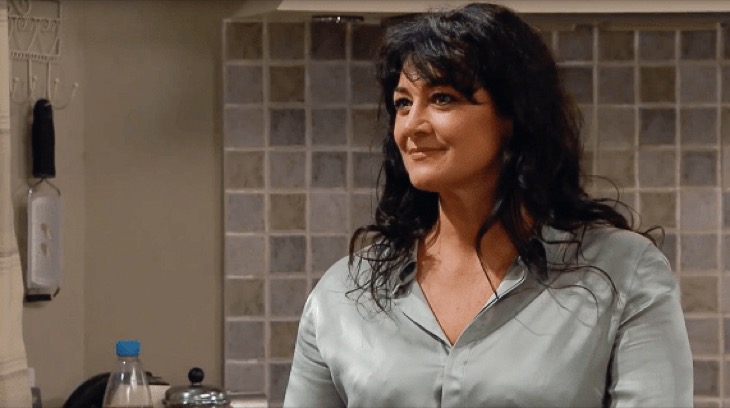 ITV Emmerdale spoilers and updates reveal that next week, we will see Moira Dingle (Natalie J. Robb) moving on with her life. For months, she begged Cain Dingle (Jeff Hordley) to forgive her. However, her affair with his son, Nate Robinson (Jurell Carter) was just too much. In a lockdown special, Cain finally admitted he still loves Moira. So, will confess his feelings or accept she has a new man?

As fans recall, Cain and Moira’s marriage crumbled after her affair was discovered. It wasn’t until the intense boat explosion that Moira learned that Nate wasn’t just a man she was sleeping with. He turned out to be Cain’s son and the two men nearly killed each other.

Emmerdale spoilers reveal that for a long time, Cain treated Moira with absolute contempt. He felt betrayed, sickened, and disgusted by her actions. He also wanted nothing more than Nate to die. At one point, Moira was so distraught that she turned the alcohol and she ended up risking losing her child.

More recently, Moira seems focused on her business and the partnership with Rhona Goskirk (Zoe Henry). The former couple has been civil, but Moira was hurt over Cain’s reaction to her birthday.

According to The Sun, we will see Moira beginning to move on from Cain. She ends up crossing paths with restaurant owner Ricky (Max Bowler). As fans recall, he wanted to place a massive order. Rhona was tempted to make a pact with Nate in order to get the client so they could get out of the red. But Moira was adamant that it was impossible.

Moving on, Moira and Ricky will end up flirting with one another. It seems she might be ready to move on, and Ricky could be her next romantic partner. However, there is something that Moira doesn’t know. That Cain is still in love with her, even after everything that has happened between them.

"You really think anyone knows anyone else? NO ONE knows anyone – not really" #Emmerdale pic.twitter.com/1gr28zKWVi

What Could Happen Next?

Actor Jeff Hordley spoke up about the upcoming storyline. Even though Cain still loves Moira, will he tell her how he feels? Or will he keep his devastation to himself and allow Moira to move on? The thing about soap stories is that festering issues always come up at some point. It might be right away, or it could be years, but those storylines (and feelings) are never resolved until the truth comes out.

So, it seems that Cain probably won’t tell Moira right away about how he feels. But it will come out at some point. Knowing Cain, he will probably blurt it out at the worst possible moment. As for Moira, she will be stunned, but will she want to go back or continue moving forward? Well, that remains to be seen.