General Hospital Spoilers: Nikolas & Ava Have Not – Are They Falling In Love? 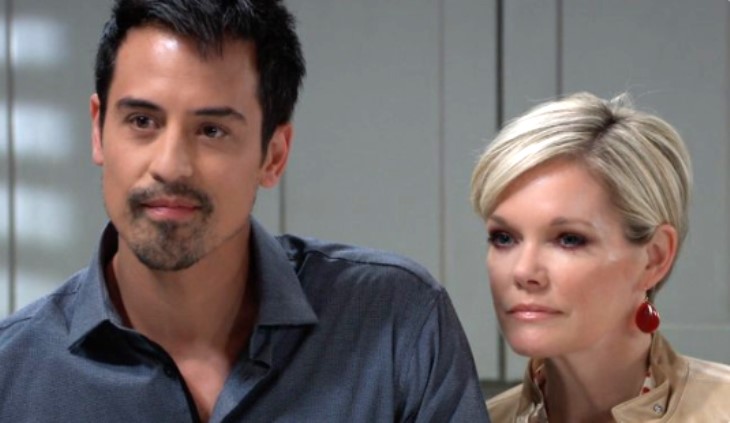 General Hospital (GH) spoilers tease that Ava Jerome (Maura West) and Nikolas Cassadine (Marcus Coloma) may very well be growing restless. Stuck in a sexless marriage and unable to cheat on each other without losing a fortune, it won’t likely be long until one of them tries to get away with a secret affair.

Ava’s last lover was Ryan Chamberlain (Jon Lindstrom), who was pretending to be his own twin brother, Dr. Kevin Collins to hide his serial killer activities. But when Ava got angry with her daughter Kiki Jerome (Hayley Erin) and went on a long rant about her, Ryan killed Kiki thinking that’s what Ava really wanted and needed. Ryan came back from his attack on Kiki and made love to Ava that same night.

Eventually, Ryan was found out and Ava was devastated by Ryan’s true identity. Once she realized they made love right after Ryan killed her daughter, she was even more disgusted with herself. She hasn’t been with anyone since Ryan, but she likely hasn’t been ready to take that kind of step with anyone until recently anyway.

And since she and Nikolas agreed to not sleep together during their business arrangement of a marriage. In addition, Ava added a no cheating clause to their postnup agreement. If either one of them cheats, the other loses all rights to the Cassadine empire should their marriage dissolve.

General Hospital Spoilers – That Was Ava Jerome’s Plan All Along

Ava planned to get Nikolas to cheat from the very beginning. Nikolas treated Ava very badly when he first came back to town, pretending to still be dead. She committed herself because she thought she was seeing things. But even worse, “ghost,” Nikolas told Ava that he had been in hell, right next to Kiki! Nikolas wanted to a codicil to Mikkos Cassadine’s will to prove the Cassadine empire was rightly his and Ava had found it. Ava eventually agreed to give Nikolas the codicil, if they got married.

Ava wants to Cassadine fortune all to herself, so she has been very motivated to push Nikolas into an affair. She’s tried to get him closer to Elizabeth Webber (Rebecca Herbst), but she’s married now to Franco Baldwin (Roger Howarth). She also considered setting him up with Brook Lynn Quartermaine (Amanda Setton) or Britt Westbourne (Kelly Thiebaud) both of whom Nikolas has been involved with in the past. But Ava really hasn’t made any real moves to get Nikolas into someone’s bet.

Nikolas has to wait three years to reclaim the Cassadine money and businesses, he’s not going to let a fling with another woman ruin that for him. At least Nikolas wouldn’t do it unless he thought he wouldn’t get caught. But Nikolas is fairly arrogant, and wouldn’t likely think Ava would be smart enough to trap him. He just hasn’t seemed all that interested anyone right now. Perhaps he still has feelings for Elizabeth or maybe Ava is actually growing on him.

It seems most likely that without realizing it, Ava and Nikolas are slowly falling in love. Both of them will be surprised and horrified once they realize they love each other. Perhaps it will be just a hot kiss at first, but after they won’t be able to keep each other out of their thoughts. Nikolas and Ava will likely end up consummating their marriage. But where do they go from there?

General Hospital Spoilers – Nikolas Cassadine Might Be A Bigamist!

But more than likely the marriage, and the postnup, are not valid because unless it happened off-screen right before the wedding, Nikolas hasn’t divorced his last wife, Hayden Barnes (Rebecca Budig). Both Hayden and Nikolas confirmed this when Nikolas first came back to Port Charles. Hayden has left Port Charles because the danger was too great during the codicil search, but Hayden and Nikolas were still married at that point.

Nikolas disappeared for about a week right before he revealed himself to be alive on New Year’s Eve. If he knew where Hayden was right after she left town, he might have divorced her and paid her off. But that seems unlikely. Nikolas wanted the codicil badly enough to marry Ava illegally. If they do actually fall in love, this revelation could because it to end before it even started.

GH Spoilers – Valentin Cassadine Is No Longer After The Cassadine Money

Valentin Cassadine (James Patrick Stuart) recently announced that he is no longer trying to contest the codicil. There are no more obstacles for Nikolas. The Cassadine fortune is his and he finally got what he was after. He really doesn’t need Ava anymore. So why are they staying married? Perhaps, somewhere along the way, they fell in love with each other. Now they just need to admit it to each other.

General Hospital Spoilers – What So You Think?

Will Nikolas or Ava cheat on their marriage vows? Or have they fallen in love? Will Hayden come back and reveal that they are still married? Anything can happen in Port Charles, so stay tuned to General Hospital airs weekdays on ABC. And don’t forget to check back here regularly for all your General Hospital news, information, and spoilers!

Emmerdale Spoilers: Could Dawn Give Up Lucas Or Even Lose Custody