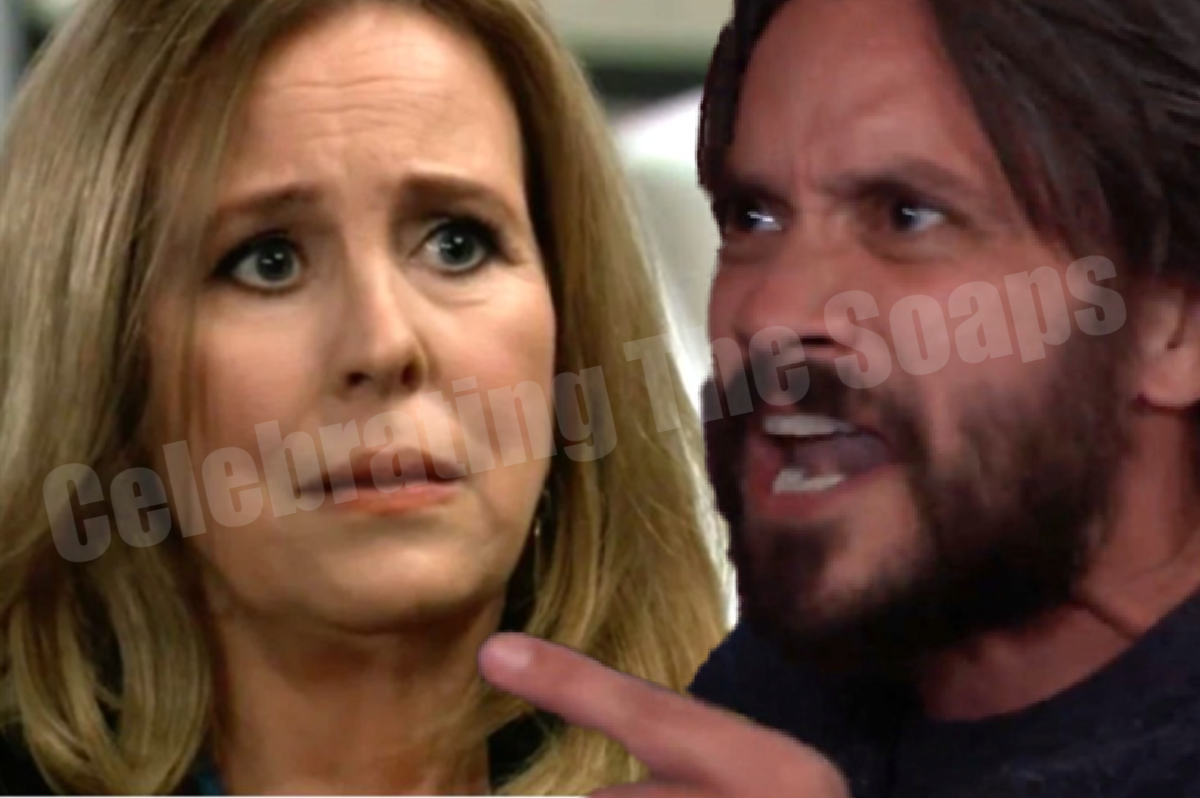 It looks like things don’t sound very good for Lulu’s (Emme Rylan) prognosis. In the preview for Monday, Dante asks an angry-looking Laura (Genie Francis) about “options”. General Hospital viewers will recall that Lulu was very seriously injured in the bomb blast that destroyed the Floating Rib, although it didn’t show up right away. Dante (Dominic Zamprogna) kept urging Lulu to get checked out, but she kept insisting she felt fine except for a headache. She was obviously downplaying the headache, when just after trying to tell Dante she still loved him while in the hospital chapel, she suddenly grabbed her head and passed out!

Dante carried her towards the nurses’ station crying out for help! Dr. Portia Robinson (Brook Kerr) had taken her for a brain scan where it was discovered she had suffered a traumatic brain injury, and they had to perform a craniectomy to relieve the pressure of her swollen brain inside her skull. Usually, doctors will drill a hole into the skull in the affected area, but so many parts of Lulu’s brain were swollen they had to remove the top of her skull to relieve the pressure, repair what they could, then reattach the skull.

Portia couldn’t tell Dante and Laura, who her husband Kevin Collins (Jon Lindstrom) had notified any good prognosis. It was a waiting game, and she would likely be in a coma and it would be a long recovery. What they didn’t know is whether she would ever recover at all, or wake up. Then there is the matter of brain function; it’s possible with that much injury that she could be partially, if not totally brain-dead.

GH Spoilers – Laura Collins Was In A Coma For Many Years, But It Was Not Due To Brain Injury

Longtime General Hospital viewers will recall that Laura herself was in a coma for many years. But Laura’s coma was not due to brain injury, and it wasn’t really even a true coma. It was a mental condition called catatonia, a form of post-traumatic stress disorder where a person becomes disassociated from their surroundings and everyone around them – they are in essence, trapped inside themselves mentally although they retain all their bodily functions, unlike someone with brain damage in a coma.

However, Laura recovered and became stronger; and she didn’t relapse even when she thought she had lost her oldest son Nikolas Cassadine (Marcus Coloma) forever. When Dante asks her about options, they may be talking about removing life support versus keeping Lulu on life support. Laura would want to retain hope that her daughter will survive; after all, she has lost two sons to presumed death who returned alive, not only Nikolas but Lucky Spencer (Jonathan Jackson) too at one time. Plus, there’s Jason Morgan ( Steve Burton ) – he too had traumatic brain injuries and survived.

But Lulu’s case may be different – and Dante, although he too does not want to give up on Lulu or hope that she will survive, maybe more of a realist than Laura. Of course Dante doesn’t want to remove all hope of Lulu’s survival and recovery, but by this time the doctors may know that it won’t happen. He may suggest it would be in Lulu’s best interests to pull the plug – and Laura will likely fight him tooth and nail about that suggestion!