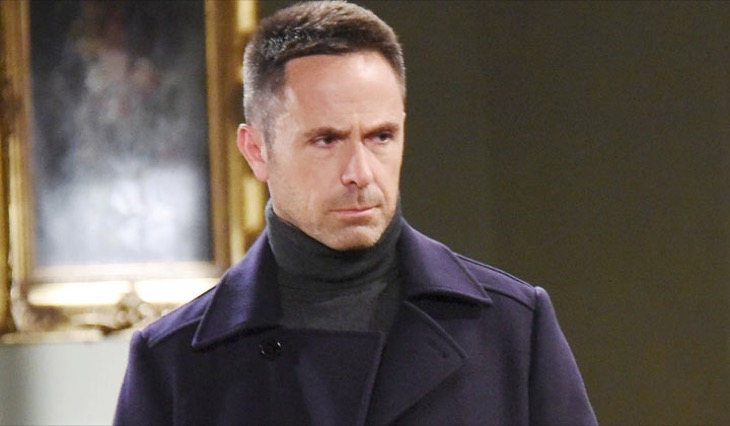 General Hospital (GH) spoilers tease that in Port Charles, NY Julian Jerome (William DeVry) is probably not long for this world. Between Cyrus Renault (Jeff Kober) and Sonny Corinthos (Maurice Bernard), Julian has found himself between a rock and a hard place. Julian betrayed Sonny by revealing to Cyrus that Marcus Taggert (Real Andrews) is alive, which will put Trina Robinson (Sydney Mikayla) right back in harm’s way.

In addition, Julian will likely be revealed as the person who left the bomb at the Floating Rib. Cyrus blackmailed Julian into dropping of the explosive, although Cyrus assured Julian that the bomb would not go off until after hours, that was a lie. Several Port Charles residents are likely caught in the explosion. It seems no matter what Julian does at this point, his life is over.

Julian might try to throw himself at Sonny’s mercy but at this point, he’s probably gone too far. Sonny has been ready to deal with Julian in a permanent way for a long time. Sonny’s only been keeping Julian alive as a courtesy to Ava Jerome (Maura West), Julian’s sister. But with his latest actions, not even Ava will be able to help him.

If Julian has any sense, he will take Nikolas Cassadine (Marcus Coloma) up on his offer to send him out of town, but even that goodwill may disappear if Lulu Falconeri (Emme Rylan), Nikolas’s sister, is injured or killed in the explosion. It’s also possible that Cyrus will want to tie up any loose ends and kill Julian himself. But Julian may not want to wait for someone to take him out, perhaps he will end his own life on his own terms. But no matter what, Julian doesn’t have a promising future.

One person who is likely to be profoundly affected by Julian’s actions is Alexis Davis (Nancy Lee Grahn). As viewers know, Alexis has fallen off the wagon following a series of tragedies that have occurred in her life. She has no intention of stopping her drinking because she’s enjoying it and isn’t even bothering to hide it anymore. But her family is threatening to cut her off and have even staged an intervention in order to get Alexis to stop. But it may very well be Julian’s actions that will make Alexis realize that she needs to take control of her life.

Drinking To Avoid The Pain

Julian’s situation may actually inspire Alexis to get back on the wagon. Julian has had chance after chance to turn his life around but it just never seems to stick. Alexis went out of her way to get Julian released from prison and even though it looked like he was going to stay on the straight and narrow, he eventually got involved with situations that put him right back in the criminal life. If he had never gotten involved with Brad Cooper’s (Perry Shen) baby switch scenario, Julian might have actually succeeded in remaining reformed.

But Alexis Still Has A Chance

But luckily for Alexis, she can still make some changes so that her life doesn’t follow the same sort of tragic patterns that Julian’s has. If she stops drinking and deals with her osteoporosis in a healthy manner, she can likely find a way to get her license back to practice law. Alexis is a brilliant attorney when she is on top of her game, so it seems very likely she can find a loophole or technicality that will restore her career. But that won’t happen until Alexis makes an effort to stop drinking.

Will Julian end up dead at the hands of Cyrus or Sonny? Or would Julian take his own life not being able to live with what he’s done? Or could he possibly just skip town to avoid all the drama and perhaps save his own life? Will Alexis be inspired by Julian’s failures to turn her own life around? Exciting times are coming to Port Charles, so stay tuned to General Hospital, airing weekdays on ABC. And don’t forget to check back here regularly for all your General Hospital news, information, and spoilers!