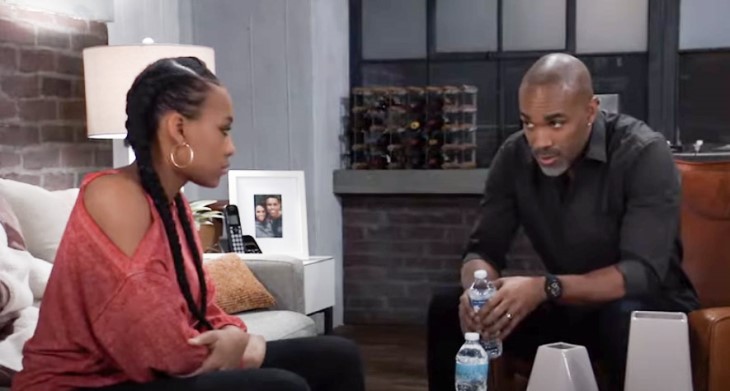 ABC General Hospital updates and spoilers tease that an explosive secret is about to erupt in Port Charles, but not everyone who needs to know will find out! Will Jordan Ashford (Briana Nicole Henry) keep shocking details about Trina Robinson (Sydney Mikala) from her husband?

Jordan and Curtis Ashford (Donnell Turner) are in love, but recent events have caused a bit of friction in their relationship. These include her lying to him about her son’s kidnapping and the presence of Cyrus Renault (Jeff Kober) in Port Charles.

Now, a shocking development could threaten the sanctity of their marriage and alter lives in Port Charles forever.

Jordan is walking on eggshells right now and it has a lot to do with Cyrus. He kidnapped her son and she was forced to release Cyrus from prison in order to get TJ Ashford (Tajh Bellow) back.

This was a sticky issue because she’s the Police Commissioner and now she’s in bed with the enemy!

Curtis and a few others know what she did and are just waiting for the hammer to fall. This has created tons of tension for Curtis and Jordan, but the sizzle factor is about to ramp up exponentially if she goes behind his back!

Cyrus was once again causing problems at GH which is what set Jordan off. He was talking to Trina and when Curtis saw the bad guy with the good girl he went ballistic.

Curtis got in between them and told Cyrus to never ever talk to the girl again, and basically threatened him. Which is not unusual, everyone is threatening Cyrus these days.

Jordan witnessed Curtis’ fierce display of machismo and it made a huge impression on her. When Trina’s mom Portia Robinson (Brook Kerr) came to town it was revealed that she and Curtis had an affair around the time that Trina was conceived.

Portia denied to Curtis that he was her father and he accepted it without question. But his heroics could have Jordan once again questioning his paternity status.

If so, she will do what she does best and turn detective and investigate this mystery! Will Jordan find evidence that Curtis and Trina are related?