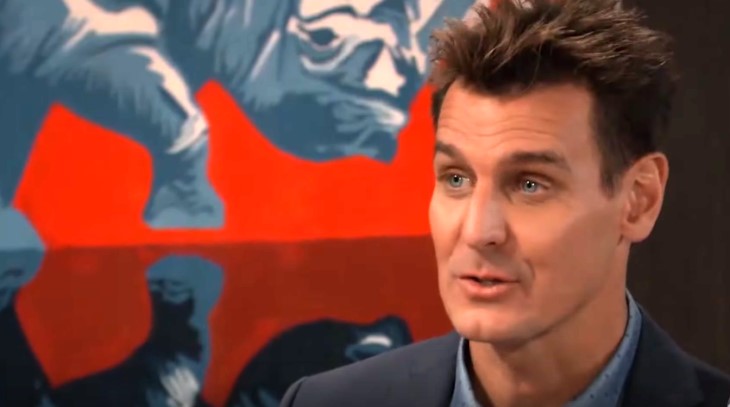 General Hospital (GH) spoilers reveal that Jasper “Jax” Jacks (Ingo Rademacher) has two major enemies. GH fans know that for literally years, Jax has viewed both Sonny Corinthos (Maurice Benard) and Valentin Cassadine (James Patrick Stuart) as adversaries. The question is, which man would Jax rather get back at most?

GH fans who have watched General Hospital for years know that Carly Corinthos (Laura Wright) has gone back and forth between Jax and Sonny more times than one can shake a stick at. Why Jax seems obsessed with pursuing a relationship with Carly when she just keeps going back to Sonny is anyone’s guess. Of course, at present Jax is enjoying “fun” with Nina Reeves (Cynthia Watros), but if history is any judge, Jax will be back to his obsession with Carly before too long.

Now, in terms of his obsession with Carly, surely GH fans have noticed that since Jax has returned to Port Charles, he’s tried to throw his weight around. Some might argue that as the father of Josslyn Jacks (Eden McCoy), Jax has a right to put his nose where otherwise he shouldn’t. Jax sees Carly’s relationship with Sonny as a dangerous one. From Jax’s point of view, Carly’s relationship is dangerous not only for her, but for Josslyn as well. Jax knows that Sonny’s in the mob. Jax has known it for years!

It’s no wonder then that Jax has had often arguments with Carly where he’s castigated her for choosing to be with Sonny. GH fans know that if Jax thought he could win back Carly’s love, he would do it by hook or by crook. More importantly, if Jax could force Sonny to watch helplessly as he took Carly away from him, so much the better!

Some GH viewers may have a hard time with this one. Does Jax really hate Valentin? Jax doesn’t really have good cause to hate the man just because Valentin used to be married to Nina (twice). On the other hand, what man enjoys the constant threat of having his lover stolen away by an old boyfriend (or husband)? Jax knows that Valentin still has a thing for Nina. If Nina is only a distraction from Carly, then Jax shouldn’t be too worried. If Nina heads on back to Valentin at some point, well Jax had his cake and ate it too, right?

On the other hand, if Jax is truly developing deeper feelings than a desire for another roll in the hay, then Valentin is a man of whom Jax should be wary. Unlike Sonny, who seems to have a certain code of honor, Valentin values trickery and Machiavellian schemes to get what he wants. Jax can spite Valentin simply by winning Nina over to the point where she no longer considers Valentin an option of any sort.

Should Jax discover Valentin making an effort, whether subtle or overt, to win Nina back, Valentin just might become Jax’s enemy number one. (Jax can always go back to hating Sonny later.)

GH viewers know that as long as it’s not in Jax’s express interest to make moves against his rivals, it’s not likely that he will. In fact, Jax will probably keep to the status quo. He will pursue a physical relationship with Nina, which will either progress to something more or it won’t. At this point, that remains to be seen.

GH fans will also probably see Jax become increasingly concerned for the safety of both Carly and Josslyn if the street war between Sonny and criminal mastermind, Cyrus Renault (Jeff Kober) heats up.

The bottom line is that while it might be a ton of fun to really stick it to them, neither Sonny or Valentin is Jax’s top priority right now. With that said, GH viewers can imagine the fireworks that are sure to ignite if, and when, that happens!