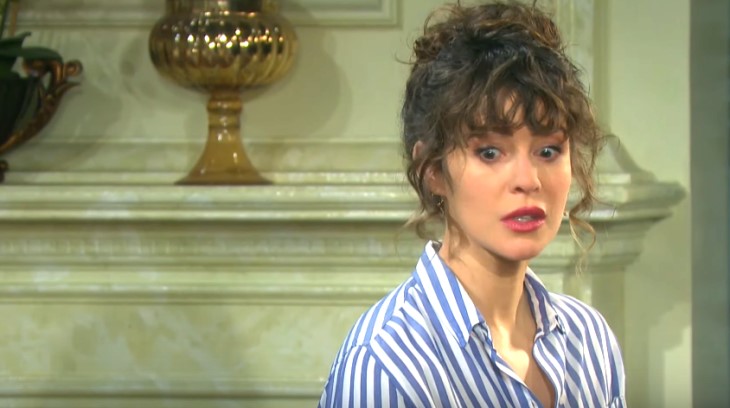 Days of Our Lives spoilers tease that a devastated Sarah will get the shock of her life when she realizes she’s pregnant again, in an upcoming episode of Days of Our Lives!

As Days of Our Lives, viewers will recall,  was devastated when she found out that the baby girl she had spent so many months, loving, raising, and worrying over when she needed a bone marrow transplant to cure her neuroblastoma wasn’t really hers at all, but Brady Black (Eric Martsolf) and Kristen DiMera’s (Stacy Haiduk) baby, Rachel Isabella Black (Josephine and Rosalind May).

Eric Brady (Greg Vaughan) was just as devastated, but he felt it his God-given duty to ruin her wedding day to Xander Kiriakis (Paul Telfer) over it and barging in and starting a fistfight! Then he and Nicole Walker (Arianne Zucker) told her Xander switched the babies on his own, but Xander told her Victor Kiriakis (John Aniston) pushed him into it, just like he pushed him into covering up for her mother’s, Maggie Kiriakis (Maggie Rogers) involvement in the crash that killed Adrianne Kiriakis (Judi Evans) and when Sarah wound up giving birth on the side of the road, with Xander’s help.

Sarah was pretty angry that Will Horton (Chandler Massey) was framed and did prison time over it, but she was able to forgive Xander because even though what he and Victor did was wrong, it was out of wanting to protect Maggie. It has been devastating to know her baby really died, but she recalls that the seat belt was pressing on the baby after the wreck until Xander got there and got her loose, so she, as a doctor, can understand what may have happened, especially after she finds out her baby had a seizure before she died.

She can also understand why Xander would want to protect her and why he wouldn’t want a baby girl to be raised by Kristen – especially when she remembers Kristen’s reaction to finding out “Rachel” died and then it wasn’t Rachel after all. Because this was a situation where again the wrong decisions were made and the wrong things done but out of good motives, Sarah has to weigh whether to stay with Xander or kick him and Victor, to the curb for good!

DOOL Spoilers -Then Sarah Horton Gets The Shock Of Her Life

Then, while she is still trying to process that “Mickey” really isn’t her baby and she’s not sure of her feelings about forgiveness or what to do about her relationship with Xander, as well as with her stepfather, Victor, she gets the shock of her life!

She has been so distracted with Mickey’s bone marrow transplant, and the shock of Mickey not being Mickey but being Rachel, and not knowing what to do – after all, it’s not fair to Brady Black (Eric Martsolf) for him to not have his daughter back, but he’s with Kristen and even though she seems to have changed for the better, what if she hasn’t, and several people in Salem being implanted with chips that changed them into other people, it just has all come together and Sarah’s head has been ready to explode!

She starts feeling familiar feelings – and trying to chalk it up to stress – she’s nauseous, she’s on edge all the time – and she checks her birth control pills and realizes she hasn’t taken several of them! She wonders if it’s too early for a pregnancy test – she gets an over the counter one. Sarah is shocked to see that she may be pregnant again, and takes one at the hospital to confirm it – she’s pregnant again!

Now she has to consider whether to forgive Xander and marry him for a whole different reason – after all, he has never been anything but a perfect daddy when he’s been with Mickey!