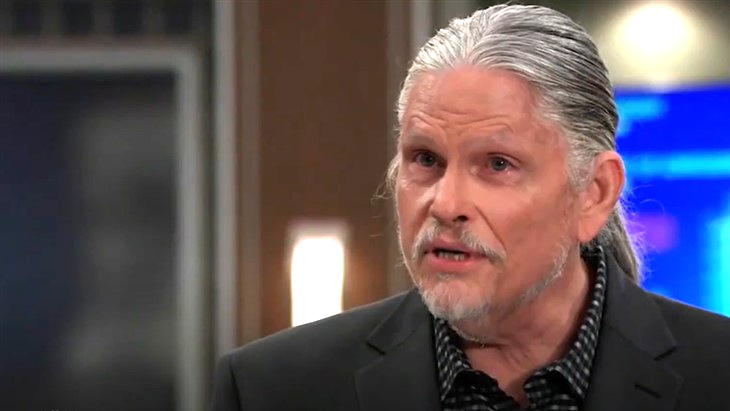 ABC General Hospital spoilers tease that Curtis Ashford (Donnell Turner) found out that Cyrus Renault (Jeff Kober) is protecting someone very close and very special to him. Could that person be Cassandra Pierce (Jessica Tuck)?

Viewers will recall that Cassandra, like Cyrus, was also a drug lord. They would appear to be close to the same age. Cassandra is presumed dead since Valentin Cassadine, (James Patrick Stuart) a former associate and lover of hers, blew up her escape boat after she had kidnapped his daughter, Charlotte Cassadine (Scarlett Fernandez), which was unforgivable as far as Valentin was concerned.

Once Charlotte was safe, he tricked Cassandra into thinking that he was going to help her escape, but planted a bomb in the boat he gave her to escape in, and set it off once she was away from the pier and out on open water! So it stands to reason that Cassandra if she survived, would be in bad shape and probably needing home care. She “died” in November 2019, only a short time before Cyrus’ men started invading Port Charles.

Their first victim, Bob Massicotte (Randy J. Goodwin) was found dead in December 2019, about a month after Cassandra’s escape boat blew up. They could have easily been in Port Charles and watching the docks in November! In August 2020, Curtis, anxious to prevent Renault from causing any more havoc in his and his wife Port Charles Police Commissioner Jordan Ashford’s (Briana Nicole Henry) life, approached Cyrus at the bar in the Metro Court with a warning!

TJ Ashford (Tajh Bellow) had been released by Cyrus at that time after Jordan was forced to exonerate him. Viewers will recall that she, Bob Massicotte, Mark Simon, (uncredited actor), and Marcus Taggert (Réal Andrews) had conspired while in the DEA to frame Cyrus by manufacturing evidence, as a last-ditch effort to take him down. It worked, but after several years of Cyrus being imprisoned in another state, he had managed to get himself transferred to Pentonville Prison!

Cyrus had stated his intent to take over Sonny Corinthos’ (Maurice Benard) territory, and the first “messages” in the form of attacks, indeed had taken place at Sonny’s warehouse. There were also attacks on the docks nearby, and at a bar in Bensonhurst where Sonny and Jason Morgan (Steve Burton) had taken Mike Corbin (Max Gail) in an attempt to help him regain some of his memories. Sonny had intended to put his father into an experimental treatment program for Alzheimer’s patients but was unable to because of the attack.

That proved that Cyrus had a wide network he was running on the outside, and people with eyes everywhere! But was that the only reason he decided to come to Port Charles? Curtis warned him that he had known about the house on Wilson Street, including the house number, where Cyrus was protecting someone. Curtis implied harm to the person in the house, and Cyrus was visibly disturbed! Curtis’ implied threat scared Cyrus enough to tell Jordan to call off her husband! If the person Cyrus is protecting is Cassandra, she could be his sister, since nothing indicates that Cyrus was in Europe at the same time Cassandra was.

They could have been running two divisions of the same drug running and manufacturing organization, however, and Cyrus could have thought it was Sonny who blew up her boat instead of Valentin, because she may not be able to tell him or write down who supplied the boat! Cyrus’ men could have already been in Port Charles at the time also, and found her injured in the water and saved her!

The Bold And The Beautiful Spoilers: Thorsten Kaye On Wedding Do-Over, ‘It Will Upset Brooke’