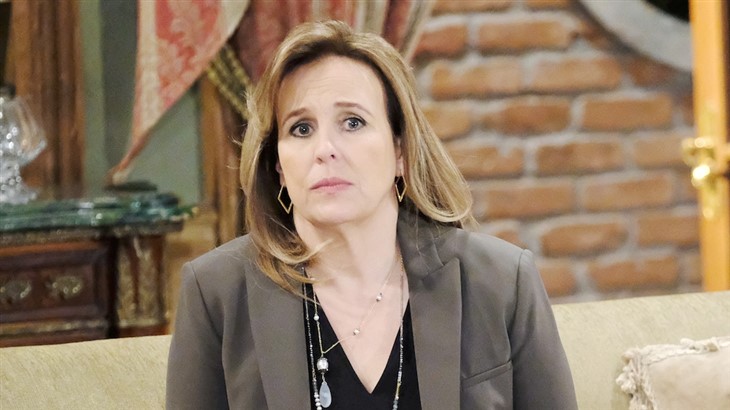 ABC General Hospital spoilers reveal that at one time, the most popular couple on the planet were Luke and Laura. They debuted in the early 1980s and in their heyday the couple had plenty of merch produced in their honor. You might even have a piece of nostalgia yourself, tucked in the dark recesses of your closet!

The sheer volume of Luke and Laura merch was overwhelming and there was no way either of their portrayers, Anthony Geary and Genie Francis, could have collected every last item out there. Many times fans would send a memento to one or the other star but plenty of mementos would have fallen through the cracks.

Which is exactly what happened with a special gift that Genie recently received.

GH Spoilers – What Did Someone Send Genie Francis That Touched Her Heart?

Genie tweeted about the gift saying, “Never knew I was a paper doll! 👗#GH.” The accompanying picture shows Genie with a big grin on her face as she holds a book full of paper dolls int eh likeness of both Luke and Laura!

A quick look at eBay reveals that plenty of Luke and Laura memorabilia can still be bought, including puzzles and a board game. But the Luke and Laura paper dolls book seems to be a bit rarer.

Jen found this for me. Never knew I was a paper doll! 👗#GH @GenieFans pic.twitter.com/gr7u2EYUEr

In an ironic twist of fate, Genie’s husband, Jonathan Frakes, who starred in Star Trek: The Next Generation, has a tie to her new find. In 1984 the handsome and talented actor starred in the primetime soap Paper Dolls. It also featured soap star Morgan Fairchild (ex-Anjelica, Days of our Lives). Both Frakes and Fairchild were involved in a professional relationship on the show that was set in NYC.

What’s next for Madame Mayor, Laura Collins, in Port Charles? The feisty mayor is hellbent on clearing her town of nasty and deadly mob wars, and specifically Cyrus Renault (Jeff Kober).

Cyrus has no fear of Laura so it will be interesting to see these two wily, savvy and powerful foes interact. Does Laura have what it takes to send Cyrus running? Or will Cyrus be successful in ruling the town with an iron fist and an underworld mentality?

‘The Bold And The Beautiful’ Spoilers: Flo Escapes While Wyatt Is Held Captive?