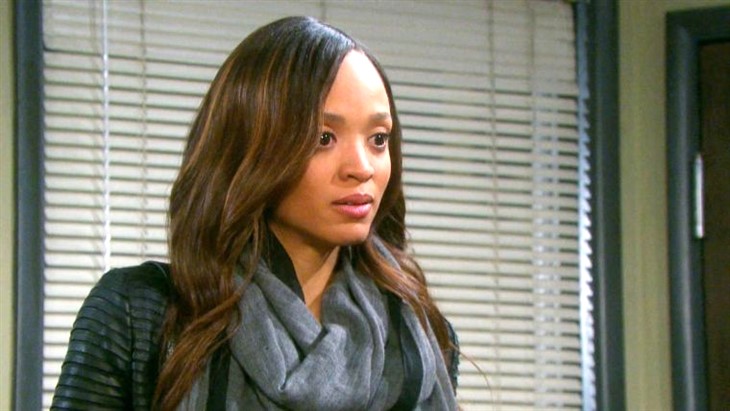 NBC Days of our Lives spoilers reveal that there may be much more to Tamara Price’s (Marilyn McCoo) fainting spell that took place during her daughter Lani Price’s (Sal Stowers) wedding. It was the wedding of the year (so far!) in Salem, but things didn’t exactly go as planned.

For one thing, the mother of the bride fainted and had to leave before the I do’s. Next, Gabi Hernandez (Camila Banus) showed up uninvited, followed by Vivian Alamain (Louise Sorrel) with a gun.

What did go right? Elani managed to actually get married at what was their second attempted nuptials!

It was terrific to see pop star Marilyn McCoo back on the canvas as Tamara. She has a glow and presence about her that would be wonderful to bring to Salem on a long-term basis.

Unfortunately, Tamara became ill during the ceremony which scared the wits out of her daughter. Tamara explained the worry away by saying that she just had a little bout of low blood sugar.

DOOL Spoilers – Does Tamara Price Have An Inheritable Condition?

Tamara assured the guests that she was fine and went back to her room for a little rest. But not before telling Lani that she wanted the wedding to continue without her.

Does this seem strange to anyone else? What was the purpose of bringing a significant character to the canvas only to have her leave before the reason for her being there went off?

Days of our Lives spoilers – Elani have been through heck and back is there a dark cloud on the horizon?

It does seem odd that Lani’s mom came and went in the blink of an eyelid. Why would TPTB not allow her to be at her daughter’s wedding?

Days Of Our Lives #DOOL Spoilers: Claire Approaches Ben With A Tempting Offerhttps://t.co/Q1SSxWM6v6

It makes sense though if there is a serious reason why Tamara got sick, and that down the line that reason has something to do with Lani. Lani is pregnant and is trepidatious about her condition because she lost her first child. What if Tamara’s condition, which was never fully explained, is inheritable and strikes Lani?

It’s entirely possible that Tamara’s sickness will be connected to Lani in the form of Lani’s health becoming endangered in the same way her moms were. This is not good news for Elani, stay tuned to see what might transpire.

Days Of Our Lives Spoilers: ‘Wilson’ Loses Allie’s Baby! The Cost Of…